Shah has expressed his eagerness to play against India and challenge Virat Kohli. 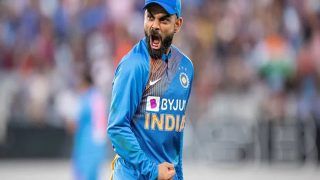 After announcing his arrival to international cricket with a bang, Pakistan pacer Naseem Shah has expressed his eagerness to play against India and challenge Virat Kohli. The 17-year-old cricketer, who was all over the news after being picked for the Australia tour, said India-Pakistan matches are always special.

“Yes definitely. India versus Pakistan is always special and I have already been told that players can become heroes and villains in those matches. They are special matches as they happen so rarely and yes, I am looking forward to playing against India whenever that opportunity arises. I hope that I can bowl well against India when that chance comes by and won’t let our fans down,” Naseem Shah told PakPassion.

The pacer also opened up on the prospect of bowling to the India skipper. He said he respects Kohli but does not fear bowling to him. Calling it a challenge, he said he is looking forward to bowling to him.

“As for Virat Kohli, I respect him but don’t fear him. It’s always a challenge to bowl to the best, but that’s where you have to raise your game. I look forward to playing against Virat Kohli and India whenever that chance comes,” he added.

In four Tests for Pakistan, he has picked 13 wickets with best figures of 5/87, which includes a hattrick.