South Africa's Richard Levi rewrote the record books with a magnificent unbeaten 117 as the Proteas crushed New Zealand by eight wickets in the second Twenty20 international on Sunday. 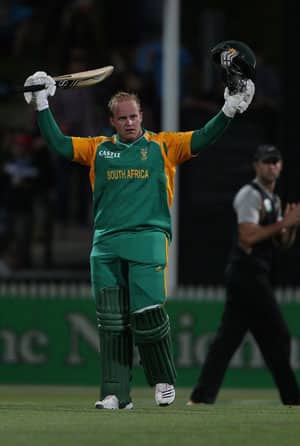 South Africa’s Richard Levi rewrote the record books with a magnificent unbeaten 117 as the Proteas crushed New Zealand by eight wickets in the second Twenty20 international on Sunday.

Levi’s 45-ball century was the fastest ever in T20 internationals and included the most sixes – 13 – in a performance which had spectators at the sold out Seddon Park ground in Hamilton ducking for cover.

His 117 run total also equalled the highest ever score by a batsman in a T20 international, matching the mark set by Chris Gayle of the West Indies against South Africa in 2007.

South Africa skipper AB de Villiers (39) provided able support as his team reached the 174-run target set by New Zealand with ease, but it was Levi who demolished the Black Caps in only his second international appearance.

“It was good fun, every shot I played came off, which was quite nice and I just kept myself nice and calm and collected and kept going,” the 24-year-old said.

The win levels the three match series 1-1 heading into the final game in Auckland on Wednesday.

Levi came out firing, plundering 23 off 10 balls in the first two overs, and never relented even after Hashim Amla (2) and Wayne Parnell (4) departed early.

He punished all of New Zealand’s bowlers but it was a particularly painful night for Doug Bracewell, who conceded 37 runs off his two overs.

Earlier, New Zealand made four for 173 with South Africa’s bowlers producing a far better display than in their six-wicket loss in the opening match in Wellington on Friday.

Martin Guptill top scored with 47, just missing out on his eighth successive international half century, as the New Zealanders set a target that, while solid, proved impossible to defend against Levi’s onslaught.

Opener Rob Nicol dominated the strike early on with a quick-fire 23 from 17 balls but a moment’s hesitation in taking off for a single proved his downfall, as de Villiers seized the ball and fired it into the non-striker’s stumps.

New Zealand still looked comfortable and were 79 for one at the half-way mark before Marchant de Lange coaxed a top edge from dangerman Guptill in the 12th over which looped through to Albie Morkel in the outfield.

The dismissal lifted the South Africans and they had New Zealand struggling for boundaries until Brendon McCullum lifted the pace with a six off Morne Morkel.

He was out in the next over trying to give Johan Botha the same treatment but James Franklin maintained the aggression when he came to the crease, hitting four sixes in five balls in his 28 off 10 before also getting out to Morkel. (AFP)

Man of the Match: Richard Levi