After a famous win over India, there is some bad news for their camp with Mutumbami being injured.

Zimbabwe’s wicketkeeper-batsman, Richmond Mutumbami, has been ruled out of the second Twenty20 International against India to be held at the Harare Sports Club on June 20 because of an injury. He is uncertain for the third and final match of the T20 series which will be held in the same venue. Zimbabwe is currently leading the three-match T20 series against former champions after a nail-biting 2-run win over the visitors. Posting a healthy total of 170 for 6 in their 20 overs, Zimbabwe bowlers did well to defend Team India’s batting line-up and win the match in the last over. ALSO READ:India vs Zimbabwe 2016, 2nd T20I at Harare, Predictions and Preview: Resurgent Zimbabwe look to seal series against India

According to WisdomIndia, Mutumbami was injured during his team’s famous win when the second ball of the sixth over, bowled by Jaydev Unadkat, hit him on his right hip, resulting in a swelling. He immediately walked off the ground to the hospital. An x-ray ruled out fracture or dislocation, but he has been advised to use crutches while standing or walking in order to reduce the strain on his hips.

Mutumbami has so far represented Zimbabwe in six Tests, 31 One-Day Internationals and 14 T20Is, and his absence opens up an opportunity for Peter Moor, who sat out of the first game of the shortest version of the game.

While Malcolm Waller kept wicket during Zimbabwe’s two-run win, the management also have the option of handing over the responsibility to Moor, who has been deputising for Mutumbami in the recent past. 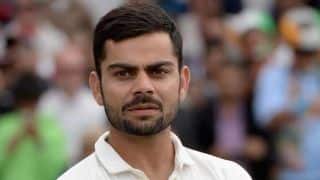