Ponting believes Cameron Bancroft also has chances to make it to the Australian side.

With 2017-18 Ashes round the corner, Australia s wicketkeeper conundrum seems to find no respite. Former Australian cricketers have weighed their opinions. Peter Nevill, who has not played international cricket since November 2016, is busy seeking help from Ian Healy. His rival Matthew Wade, on the other hand, is trying hard to retain his spot through the Sheffield Shield matches.

However, Ricky Ponting, who will be seen in the commentary panel of The Ashes, has made his pick in a chat with cricket.com.au. Ponting opines Nevill is the obvious choice for the gloveman role. Nevill also has numbers by his side: in 9 First-Class matches since the end of last summer’s home Test series against Pakistan, Wade has averaged 22.57 with 2 half-centuries, while Nevill has averaged 64 with 2 centuries and a fifty for New South Wales over the same period.

Ponting also has not completely denied the chances of Cameron Bancroft making an entry into the Australian squad, though he has doubts over South Australia s Alex Carey.

Nevill is the obvious one to go back to. He makes very few mistakes with the gloves, a good consistent character, a good guy to have around your side, works his backside off with the bat, he s very hard to get out and when he bats for New South Wales he makes big scores. So for me he s the obvious one.

Bancroft has chance to No. 6 batsman

I ve heard Bancroft s name mentioned the last few weeks, he has a chance to be the number six batter or the number seven batsman-wicketkeeper. Alex Carey s name has been thrown around as well. I m not sure he s quite ready for it yet just looking at how his batting numbers stack up in First-Class cricket. Indeed, Carey has to do better than a batting average of 24.74 to find a place in an Australian side hungry to regain The Ashes. 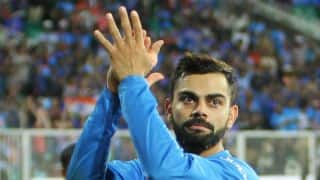 Virat Kohli: My game will be nothing if I do not give my 120 per cent