The old firm of Ricky Ponting and Michael Clarke put India's hapless bowlers to the sword with contrasting centuries as Australia took command of the fourth and final cricket Test on the opening day itself on Tuesday at Adelaide Oval. 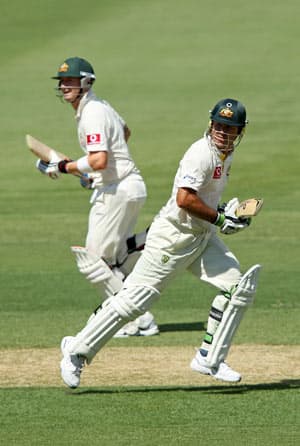 The old firm of Ricky Ponting and Michael Clarke put India’s hapless bowlers to the sword with contrasting centuries as Australia took command of the fourth and final cricket Test on the opening day itself on Tuesday at Adelaide Oval.

Ponting (137) and Clarke (140), both of whom tormented India in the second Test in Sydney with centuries, joined hands once again for an unbroken 251-run fourth wicket stand which took the hosts to a comfortable 335 for three after a shaky start.

Australia have already clinched the series with a 3-0 lead and India are desperately hoping to avoid a whitewash.

The effort was not all that bad to start with as India struck two blows inside the first 10 overs after the hosts opted to bat first.

After that, it was former captain Ponting and current skipper Clarke for the rest of the day.

Ponting smashed the 41st century of his 162-Test career, his eighth against India which put him at par with Sir Garfield Sobers and Sir Vivian Richards as the batsmen who has scored maximum tons against the sub-continental team.

It is also his 23rd century at home which is one more than what Sachin Tendulkar and Jacques Kallis have scored in their glittering careers. During his knock, he also crossed the 13,000 run landmark.

For Clarke, this was his 19th century in his 80th Test, his second of the series after a mammoth 329 at the SCG early this month.

Their stand is also far better than the 210 these two put together for the fourth wicket at this very ground against India four years ago.

Ponting now has as many as six centuries from 16 Tests at this venue and four out of four against India.

In this match, Ponting has so far concentrated for 254 balls and struck 13 fours in his flawless innings.

Clarke has been the more flamboyant one, staying put for four hours and 18 minutes and 188 balls, smashing 19 fours and a six.

Ponting had batted freely in the morning session to be 43 not out at break but it was Clarke who shifted a gear or two in the afternoon. Both reached their half centuries off 69 balls with Clarke slamming eight fours to Ponting’s seven.

Resuming at 98 for three in the afternoon, Ponting and Clarke were steady to begin with against the bowling pair of Zaheer and Umesh Yadav but it wasn’t long before the big shots began booming off their bat.

Clarke shifted gears in Yadav’s second over when he pulled the youngster from the meat of his bat for four. Then Zaheer twice drifted down on to the pads and both Clarke and Ponting helped themselves to a boundary each.

Yadav was removed after four expensive overs for 26 runs which gave him embarrassing figures of none for 67 from his nine overs.

Now it was the turn of the other two frontline bowlers to face the music at the hands of the Australian pair.

Clarke went after Ishant Sharma, driving him through the covers but then edged him dangerously between the keeper and the widish slip for a four.

Ponting took the cue and chopped Sharma off the front foot past the point boundary.

The Australian skipper now turned his attention on Ashwin, pulling him ferociously and then coming down the track to lift the off-spinner over his head.

It also raised the half century for Clarke, made off 69 balls and inclusive of eight fours.

Ponting now swept Ashwin for a single to raise his 13,000 runs in Test cricket. Another drive into covers off Ishant brought the century stand for the fourth wicket.

As the tea break neared, Clarke only turned more ruthless against Ashwin. A flighted delivery was sent soaring to long off fence.

Ashwin twice bowled short at him and on both occasions, Clarke laid back to square cut him for fours. Before the over was out, Clarke had hit him over covers for yet another boundary.

Ponting brought up his century with a square drive for four off Zaheer Khan and Clarke raised his own, a little later, with a back cut past point boundary.

Ponting’s landmark took him 164 balls while Clarke’s was raised over 133 balls. The Australian skipper had 14 fours to Ponting’s 11 besides an enormous six.

As a little cloud cover came over the Oval, Indians took the second new ball in the 86th over. Ishant Sharma claimed the red cherry with Australia on 325 for 3.

Almost immediately, Sharma had a chance to claim Clarke as the batsman edged it to a vacant third slip and a valiant attempt by VVS Laxman at second slip didn’t bear fruit.

Umesh Yadav was the most disappointing of all Indian bowlers, going for 67 runs in his first nine overs and generally did no better than allow batsmen to feed off some easy runs.

Zaheer Khan did more of a containment job after his first spell and Ashwin was unrecognisable from the bowler who exercised control in his first spell. Sharma bowled too wide and much against his field.

Virender Sehwag, in his first serious day in the office as a captain, was disappointing. The team was without any intent or purpose and after a stage, players were not even bending to pick up a ball. (PTI)

Ganguly rates Kallis higher than Tendulkar and Dravid in Tests