Ricky Ponting has predicted that Australia will beat India 2-1 in the four-match Test series against India starting December 6 at the Adelaide Oval.

According to Ponting, Australia will have a clear advantage over India in the first two Tests at Adelaide and Perth owing to the much bouncy and pacy tracks at both the venues, which the Australian batters will be better accustomed to face, than their Indian counterparts.

“Basically, it comes down to whichever team bats the best,” Ponting told Cricket.com.au, adding that the bowling attacks of both the teams are good and the difference-maker in the series will be the batting.

“Both fast bowling attacks are good but I think our batsmen will play better against their quicks than their batters will play against ours. India need to get off to a really good start (in the series). If they get behind the eight ball if those first two games then they might fight back and win one Sydney or Melbourne, but it will be too late,” said Ponting.

The 43-year-old also advocated for leaving little bit more grass on the surfaces as he reckons Australian batsmen will be bat better against Indian bowlers in comparison to Indian batters facing up to the Australian bowlers. “I’d love to see the pitches have a little bit in them because I think our batters will bat better against their (bowlers) with something in them than their (batters) will against ours.

“If it’s a wicket in Perth like I saw for the one-dayer against South Africa then I can’t see India making too many at all that was a one-dayer and that (pitch) went all over the shop, with good pace and good bounce. With Adelaide being like it’s been the last couple of years, having a little bit more grass in the surface (will suit Australia). I’d like to see a little bit of grass left on them for the first two and then I think Australian can put the series to bed after two Tests, ,” said Ponting.

The former skipper also reminded that Indian have a poor history while touring Australia and lively tracks will challenge India even further.

“We’re talking 40 years of history with India coming to Australia and not being able to win because of the fast, bouncy nature of our pitches so I’d love to see them that way, he added.

India have not won a Test series in Australia in their 11 tours Down Under and has managed to win just five Test matches out of the 44 played in Australia. 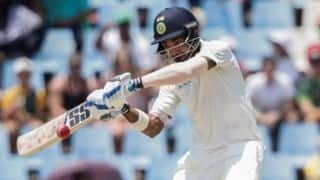