Ricky Ponting, who declared his 17-year One-Day International innings over on Tuesday after being cut loose by Australia's selectors, ranks among the greatest ever in the limited-over form of the game. 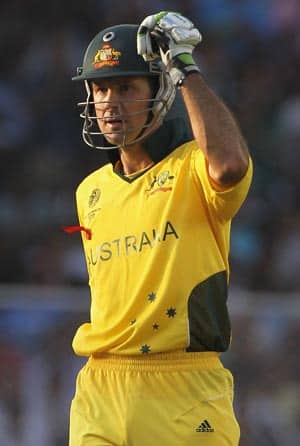 Ricky Ponting scored a brilliant century in the ICC 2011 World Cup quarter-final against India, which is his last ton in ODIs Getty Images

Ricky Ponting, who declared his 17-year One-Day International innings over on Tuesday after being cut loose by Australia’s selectors, ranks among the greatest ever in the limited-over form of the game.

The 37-year-old, who conceded that he has played his 375th and last ODI, said he intended to continue playing Test cricket after selectors told him he was no longer in their plans for Australia’s one-day team.

“I have no bitterness at all about what’s happened,” Ponting told a news conference, adding that “I totally understand” why the selectors were looking to rebuild the team for the next World Cup.

Ponting, a three-time World Cup winner and twice as captain, ranks second only to India’s Sachin Tendulkar with most runs in ODIs.

He ranks fourth all-time in the number of ODI appearances behind Tendulkar, Sanath Jayasuriya and Inzamam-ul-Haq and is the only non-Asian inside the top 10, with preceding Australian skipper Steve Waugh next at 11th with 325 games.

Ponting led Australia to two World Cup triumphs and his 34-match unbeaten run in the tournament as skipper ended when Pakistan beat Australia in last year’s competition in Colombo.

He quit as Test and one-day captain soon after, making way for his deputy Michael Clarke, but made the risky decision to continue in both teams against the advice of some prominent figures, notably Waugh.

Once Ponting chose to battle on, he ran the risk of having the decision on his future in the ODI team taken out of his hands.

That fateful day came on Monday when selectors axed him from the team after a lean trot in the tri-series against India and Sri Lanka.

Born the eldest of four children in the working class Tasmanian suburb of Mowbray, Ponting was influenced to play cricket by his uncle Greg Campbell, who played Tests for Australia in 1989 and 1990.

Ponting went on to make his state debut at 17, the youngest to represent Tasmania in the domestic Sheffield Shield competition, before he made his international one-day debut aged 20 in 1995.

He only scored one against South Africa in his first match but went on to become one of cricket’s batting titans, with his Test debut coming 10 months later in December against Sri Lanka in Perth.

Ponting had a rocky beginning in the public eye and was banned for three matches in 1999 by the (then) Australian Cricket Board following an early morning brawl in a Sydney bar. He had been disciplined for an off-field incident previously.

A contrite Ponting, with a blackened eye, gave a press conference the next day to apologise for his behaviour, but he matured into a valued mentor in the Australian team over time.

His fierce competitiveness also brought him trouble and he was reprimanded by the International Cricket Council for damaging a dressing room television in an angry reaction to being run out against Zimbabwe at last year’s World Cup in India.

Married with two children, he is known as a campaigner against cancer and established The Ponting Foundation with his wife Rianna to raise money for young Australians afflicted by the disease.

“Ricky’s record speaks for itself,” he said. “He is one of the truly great performers in the history of Australian ODI cricket, with his reputation enhanced further by him captaining Australia to two World Cup victories.” (AFP)