His partnership with Hashim Amla has given South Africa a solid base for a big total.

Rilee Rossouw, the middle-order batsman for South Africa, has scored a responsible half-century to give his side a strong base against New Zealand in the first One-Day International in Centurion. He has been a willing and stable partner to opener Hashim Amla, who himself is batting smoothly, having neared a century. Lots of dot balls, the punctuating fours all around the wicket, and occasional sixes, have featured in the SuperSport Park pitch. Amla himself has hit some sweet sixes, to inject some momentum into the innings, amid lots of defences. LIVE BLOG: South Africa vs New Zealand, 1st ODI, Centurion

Rossouw has been slower building his knock than Amla. Most of the balls he has faced have been dot balls, and he has hit a four against five bowlers. He reached his fifty off 81 balls, in the 32nd over, with a slap through extra cover for a four. There have been clinical strikes for his boundaries, and one or two edges. Off leg-spinner Ish Sodhi, he came down the track trying to conjure an attacking stroke, but edged it though the first-slip area for a boundary, indicating the difficulty in acceleration. LIVE CRICKET SCORECARD: South Africa vs New Zealand, 1st ODI, Centurion

Amla has also struggled in bits to get going, but it seems there is value of getting set.  The 100-partnership between the two arrived in 124 balls, but by then the stranglehold enjoyed by the opposition bowlers was disappearing. The surfeit of sixes are a result of small boundaries at the venue. 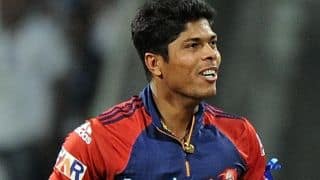 When Dilshan forgot the law of gravity!