Wriddhiman Saha was preferred over Rishabh Pant in the ongoing first Test vs South Africa in Vizag.

Critics have been terming Indian team’s decision to pick Wriddhiman Saha over Rishabh Pant in the first Test against South Africa as a warning to the 21-year-old.

Stumped by the call, the youngster is already working on improving his keeping skills with former India international and wicketkeeper Kiran More.

Speaking to IANS, sources in the team management said that Pant is very hardworking and there isn’t anything to read into the move of picking Saha over Pant apart from the fact that the team wants the youngster to fine-tune his keeping against the turning ball.

“There isn’t anything to read into the move and the team feels that Pant just needs to fine-tune his keeping skills a bit when it comes to Indian conditions in red-ball cricket and that is why he has been working with More on those aspects,” the source revealed.

When contacted, More confirmed the same, but said that it wasn’t an official appointment from the BCCI, but rather a case of the two working on and off. “We don’t have a schedule, it is on and off and not official. We just share a good relation,” he told IANS.

Unorthodox keepers and More go a long way as he was one of those pivotal in backing former India skipper MS Dhoni and the former chief selector feels that Pant has an enviable record.

“He is keeping really well and I see a lot of improvement. He has got 53 dismissals in 11 Test matches and that is almost 5 dismissals per game. Every day you play, every day you grow. He has come up really well. The basics are very important and he has been working on that,” he pointed.

Asked about the specific areas that More has worked on with Pant, he said: “We have worked on his balance and his hand positioning because he has a terrific cricketing mind and picks things up very quickly. We have worked on small finer details. Hand and body positioning is very important and it takes time. With experience you learn.”

While many believe that Pant’s keeping is a work in progress, More begs to differ. “He has been playing for India for the last one and a half years. Everybody has their perception, but for me, he is ready. You can go through my record after 11 games, he has a fantastic record,” he said. 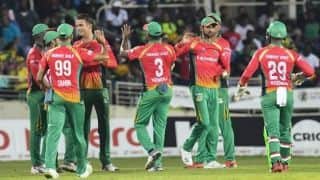