This is not only the fastest century in Ranji Trophy history but Rishabh Pant also becomes the only Indian in the history of First-Class cricket to achieve this feat.

From Under-19 star to First-Class cricket, Rishabh Pant has yet again set a new record of fastest century off just 48 deliveries in Ranji Trophy 2016-17 while playing against Jharkhand. This is not only the fastest century in Ranji Trophy history but he also becomes the only Indian in the history of First-Class cricket to achieve this feat. It was previously Rajesh Borah who held this record when he scored the fastest century off just 56 deliveries against Tripura in 1987-88 Ranji Trophy, but Pant proved to be a master in this achievement. His century included 10 sixes and 6 fours, which was secured in the second innings during Delhi s clash against Jharkhand. Ranji Trophy 2016-17 Points Table & team standings

Note: The list comprises of centuries achieved within 60 deliveries or less. Obviously, it also includes the fastest Test hundreds. The top three batsmen to hold the record till date are Glen Chapple, Mark Pettini and Murray Goodwin. Three Indians have achieved this feat in Ranji Trophy. Rajesh Borah held the record before Pant, while Reuben Paul was the first Indian to get to a First-Class hundred inside 60 balls.

He also achieved a century in the first innings and was dismissed for 117 off 106 deliveries. He has previously before this scored his career best 308 against Maharashtra in Mumbai in the same tournament. He became second wicketkeeper-batsman to score triple-ton in Ranji Trophy and seventh overall in First-Class cricket. Pant was only second batsman after Raman Lamba to do this as Delhi batsman. At the age of 19, Pant became third youngest batsman to score a triple-century after Wasim Jaffer and Abhinav Mukund.

He is currently unbeaten and is playing at 135 off mere 66 deliveries. For his triple century, Pant received accolades from former Indian cricketer and now the wittiest cricketer around Virender Sehwag.

As Sehwag had said, Rishabh Pant ne Pant utar di. 308, brilliant innings against Maharashtra #RanjiTrophy. No idea what is following next from Sehwag after this historical record set by Pant. 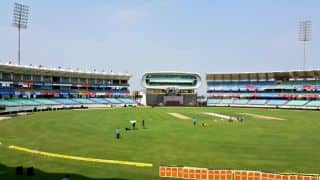