Rishabh Pant has the temperament and skills to bat differently: Rahul Dravid

Rishabh Pant has the temperament and skills to bat differently: Rahul Dravid

India are all set to take on England in the five-match Test series starting from August 1. The BCCI announced a 18-player quad for the Test series which saw a return of few players like Mohammed Shami and Test specialist Murali Vijay, Cheteshwar Pujara and Ishant Sharma. However, the interesting selection was Rishabh Pant. His form in domestic season and India A has given him a place in the Test squad.

Indian players have been playing a lot of cricket in last few months with the national team playing the limited-over series as India A were busy playing one day series and red-ball cricket. India A coach Rahul Dravid talked about players and their roles in the team in an interview with bcci.tv.

Pant was seen in exquisite touch in IPL 2018 where he finished as second highest run-scorer in the tournament. He scored 684 runs runs in 14 innings including one ton with an average of 52.61.

“Rishabh was quite excellent on the tour. He is obviously a very talented player. He showed in three or four innings that he was willing to bat differently. We all know the way he bats. Even in the 2017-18 Ranji Trophy season when he got over to 900 runs his S/R was 100 plus and we have seen him bat similarly in the IPL as well,” said Dravid

“On this trip, we challenged him a lot to bat according to the situation. He got a critical 64 (not out) in the one-day final when he was the last recognized batsman and also against West Indies A when he put on a 100-run partnership with Jayant Yadav.”

“He showed that he could bat differently. He has the temperament and skills to bat differently. He is always going to be an attacking player but reading of the situation when you are playing red ball cricket is required. We are glad he has been picked in the national team and I hope he takes this maturity into the national team and hopefully builds from thereon,” he concluded.

India will play a four-day warm-up match against Essex from 25 July ahead of the Test series. 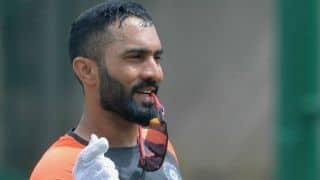