Rohit said the team will back young wicketkeeper-batsman Pant and provide him sufficient opportunities.

“My job as a captain is very simple I just want to take the team forward from where Virat has left the team. What I have done at the limited opportunities that I have got is to maintain what Virat has done previously with the team. I am just trying to carry that forward,” Rohit told reporters on the eve of the first T20I.

Rohit, 32, stated the team will back young wicketkeeper-batsman Pant and provide him sufficient opportunities before they pass any judgment on his capabilities and talent. “We have stuck with Rishabh Pant all this while and this is the format he embraces more. This is the format that gave him a lot of attention and where he excelled. We have to stick with him for a while and see how he performs because we have seen how well he can take the game forward on his day,” said Rohit.

“So, we need to back him a little more. He has hardly played 10 or 15 T20Is. So, it’s very early to judge him whether he is good or not. So, I still believe there’s a lot of time left before we pass any judgment on Rishabh Pant.”

Rohit further conceded that the hosts will not take the current Bangladesh team without senior players like Shakib Al Hasan and Tamim Iqbal lightly and will look to be at the top of their game.

“Bangladesh is a very good team. All these years, we have seen how well they have performed, not just at home but away also whenever they have gone out. Especially against us, they have always put us under pressure. So, there’s no way we look this team differently,” he said.

“I understand there are two key players missing (Shakib and Tamim), but they still have quality in their squad which can upset any team on that particular day. I wouldn’t say upset but I would say beat. They are very mature cricketers now as all these players have played for long time.

“There are few young players. But for us, it is important not to focus too much on the opposition, but to focus on what we need to do as a team. We also have a young team and a lot of guys want to show what they are capable off. We would focus on that particular aspect more.”

The Indian captain also stated that either one of Sanju Samson and Shivam Dube will feature in the playing XI for Sunday’s match. The Kerala pacer indulged in fielding drills on Friday while Pant went about practicing his glovework and if Rohit’s words are anything to go by, the allrounder might be getting his maiden India cap.

“All doors are open for everyone and anyone can play at any point of time,” he said.

One area where the current Indian team has not been able to perform well is while setting up targets and defending them. This area, as acknowledged by the team management including batting coach Vikram Rathour and Kohli himself, needs improvement. And Rohit is looking to plug-in holes in that area during the three-match series so that when the team travels to Australia next year for the World T20, they have all their bases covered.

“We have looked at certain numbers and stats as to how we have done when it comes to chasing and also posting targets. Our numbers are very good when we are chasing, whether we are playing in India or outside,” he said.

“But something which we have been wanting to focus on was on posting targets and defending. That’s why, you saw us chosen to bat first on a sticky wicket in the last T20I against South Africa which we lost in Bengaluru. We wanted to challenge ourselves.

“That’s what we want to do. We want to set targets on difficult pitches and defend it. We want to make sure we have all bases covered before the World Cup in Australia. This is the perfect time for us to do all that. But at the same time, we want to win games as well. It’s not about trying and giving. Winning games will always be the priority. We have not performed that well in T20Is we want to be at the top in all three formats, we have set the standards and there’s no reason why we can’t achieve that.” 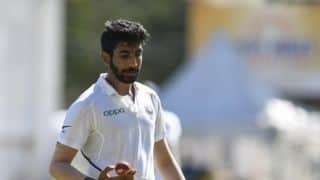 Jasprit Bumrah's recovery on track, expected to be back by January 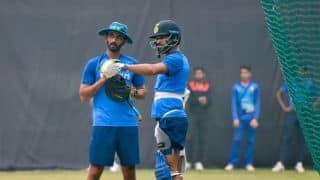