India wicketkeeper Pant was seen thoroughly enjoying himself during the fourth and final Test against Australia, the video of him singing went viral.

India wicketkeeper Rishabh Pant surely knows more than a way or two how to have fun on and off the field. Known for his explosive batting and constant chirping, Pant has often made headlines for several reasons during the ongoing Border-Gavaskar trophy. On Monday – day 4 of the fourth Test between India and Australia, Pant was heard singing ‘Spiderman, Spiderman’ song at The Gabba, Brisbane.

The incident happened during Australia’s second innings when skipper Tim Paine and Cameron Green were batting at the crease. The video of Pant singing the song was tweeted by a user and it instantly went viral. With the trophy on the line, there is tension in both the camps, as the winner of the fourth and deciding Test will claim the Border-Gavaskar trophy.

Forget Spiderman, he goes: Tune Churaya mere dil ka chain after that. Hahahaha. Only one Pant, commented one of the users.

Rishabh Pant casually singing “Spiderman Spiderman” behind the stumps has to be one of the moments of the summer. GOLD!! said another.

“Ah, finally a guy with some music taste. Always in the world of his own,” tweeted one of the users.

India bundled out Australia for 294 in their second innings, thus setting themselves a target of 328 to win the Border-Gavaskar Trophy. The visitors reached 4/0, before rain stopped play and subsequently umpires were forced to call for early stumps on Day Four. Rohit Sharma and Shubman Gill remained unbeaten on 4 and 0, respectively.

Earlier, the visitors had posted 336 in reply to Australia’s first-inning score of 369, thus conceding a 33-run lead. 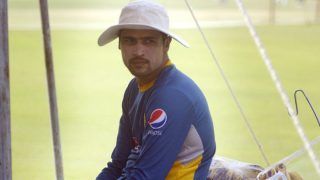