Rising Pune Supergiant (RPS) restricted Mumbai Indians to 129 for 8 in the final of Indian Premier League (IPL) 2017. Playing at Rajiv Gandhi International Stadium in Hyderabad, Jaydev Unadkat and Adam Zampa took 4 wickets between them, while some magnificent fielding displays left two Mumbai batsmen short of crease. Barring Rohit Sharma (24) and Krunal Pandya (47), no other batsman could brave the elements and steady the sinking ship. So slow was the track that Mumbai managed a mere 13 boundaries. However, this being Pune’s last stint in IPL, Steven Smith and his comrades will give their all to attain such paltry total. Full scorecard: RPS vs MI

After three low-scoring, unlike-T20 contests in the playoffs, the finale was expected to be — if not a graveyard for the bowlers — a high-scoring one. The wicket had cracks by abundance with a thin film of grass unequally placed on it. Mumbai, taking everyone by surprise, chose to bat first stating he wanted to take pressure off the batting unit. Smith cited the same.

The very first ball Jaydev Unadkat bowled was in the corridor of uncertainty. Lendl Simmons let it go to MS Dhoni’s gloves. The usual, subcontinent bounce came as a breather for the batsmen as well as fans, hinting that the runs will be walloped by the bucketful. However, Unadkat wasted no time in beating the batsmen with variation. He bowled three consecutive off-cutters. Mumbai gathered 3 runs in the opening over.

The next over saw the ever-improving Washington Sundar trap the batsmen in trouble with his innocuous-looking off-breaks. He conceded 4 runs. The pressure, for apparent reasons, mounted on Mumbai. Trying to break the shackles, Parthiv Patel could not get enough elevation against a change-in-pace delivery and found Shardul Thakur at mid-on.

Pune’s modus operandi had Mumbai in maze. They did not give anything for Mumbai to take advantage of. Unadkat struck again: Simmons overlooked a variation in pace, and his wobbly back-lift induced a leading edge back to Unadkat who, without a shadow of doubt, brought a halt to the hunt for the catch of the season. Changing his direction in the follow-through and diving to his left, he pouched the ball a millimetres above the ground. The double blow left Mumbai stuttering at 9 for 2 in 3 overs.

In came Rohit at No. 4. He collected Mumbai’s first boundary, delicately opening the face of bat and easing it past backward-point — in the sixth over. That was not it. Rohit took 4 fours off that over by Lockie Ferguson. Full updates: RPS vs MI, IPL 2017

Reminder: in the three finals Rohit featured in, his side had ended up triumphant.

Rohit’s belligerence instilled confidence in Ambati Rayudu, who sent a short delivery from Adam Zampa to the fence. Mumbai were inching towards gaining some momentum they were desperately in search of. However, Smith’s brilliance in the field left Rayudu short of the crease. Pinned at mid-off, Smith garnered a direct-hit to squander Rayudu’s attempt for a quick single. Pune were back in command, pushing Mumbai back.

Pune strangled Mumbai further. Rohit, off Zampa, found Shardul Thakur at deep mid-wicket while trying to clear the fence. In came Kieron Pollard, who has scores of 27 off 10, 60 off 32, and 36 off 18 in IPL finals. Maintaining his reputation, he clobbered a six off the first ball. That, all the same, did not last long. Off the last ball, Pollard tried a near reminiscence of the six only to bag into the hands of Manoj Tiwary — planted behind the bowler but on the fence. Mumbai lost half their side for 65 in 11 overs.

The onus was on Krunal Pandya to make amends. Fighting against odds, Krunal plundered 47 off 38 to take Mumbai out of the woods and take them past 120. He swatted 2 fours and 2 sixes in the last 3 overs to take Mumbai to 129 for 8, the second-lowest total in IPL finals. Krunal fell off the last ball, but not before he added 50 for the eighth wicket with Mitchell Johnson in 35 balls. 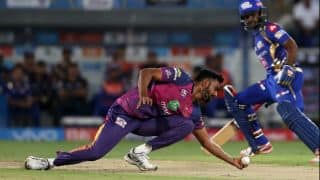 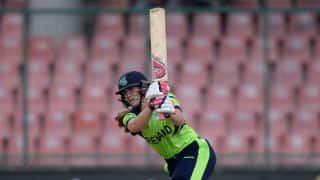