The Pune is at the sixth spot in the eight-team standings with just four points, while Mumbai are lying third with eight points from as many games.

The Pune outfit is presently languishing at the sixth spot in the eight-team standings with just four points, while their opponents for tomorrow’s game, Mumbai Indians, are lying third with eight points from as many games. With the business end of tournament nearing, time is running out fast for Pune to get a series of wins and return to the top four reckoning.

Come tomorrow, Rising would fancy their chances against Mumbai Indians having comfortably defeated them by nine wickets in the opening match of the tournament. But it would be easier said than done as Dhoni faces the uphill task of selecting a balanced bowling combination which would deliver results for him.

The absence of its two main players in Faf du Plessis and Kevin Pietersen, who have been ruled out due to injuries, notwithstanding Pune’s batting unit has lived upto its reputation with Ajinkya Rahane, Steven Smith and Dhoni himself delivering the goods for the side.

Pune’s batting would also be bolstered by the inclusion of Australian Usman Khwaja, who replaced Du Plessis in the squad. Rahane has been among the runs scoring another half-century against Gujarat Lions, but going into tomorrow’s game the most heartening fact for Pune would be Steven Smith’s 101 off just 54 balls yesterday in a losing cause.

And that’s the reason why bowling is the biggest worry for Dhoni. Despite putting up 195 for three on the board yesterday, Pune bowlers failed to defend the score against Gujarat Lions, losing the match by three wickets in a last ball finish. The likes of Albie Morkel, Ashok Dinda, Thissara Perera, and Ravichandran Ashwin all went for runs.

Rajat Bhatia and young spinner Murugan Ashwin showed some restraint but what is hurting Pune the most is the poor form of Ashwin. On the other hand, Mumbai Indians are on a high with back-to-back victories over Kings XI Punjab and Kolkata Knight Riders in their last two games.

After a jittery start, the Rohit Sharma-led defending champions got their act together to move to the top half of the points table. On the batting front, Rohit himself has shouldered the responsibility with steady knocks in the company of Ambati Rayudu.

But it is big-hitting Kieron Pollard, who has been the star for Mumbai in the last couple of matches. Pollard smashed a blistering unbeaten 51 off just 17 balls to power Mumbai Indians to a spectacular six-wicket win over Kolkata Knight Riders in their last match.

But the only concern for Rohit would be opening partnerships and the indifferent form of Jos Buttler in the middle. The Pandya brothers, especially Krunal, is turning out to be a handy player for Mumbai both with the bat and ball.

On the bowling front, the New Zealand fast bowling duo of Tim Southee and Mitchell McClenaghan has been doing the job for Mumbai upfront with Jasprit Bumrah providing them support in the middle overs. Veteran off-spinner Harbajan Singh too has performed well so far. 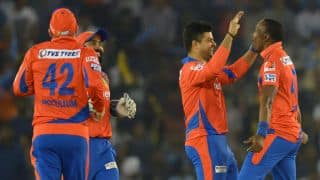 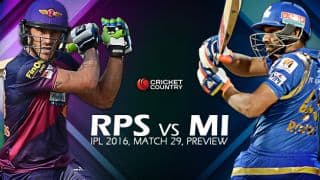