India captain Mahendra Singh Dhoni and England counterpart Andrew Strauss were united in their praise of Sachin Tendulkar with the batting great on the verge of another landmark record. 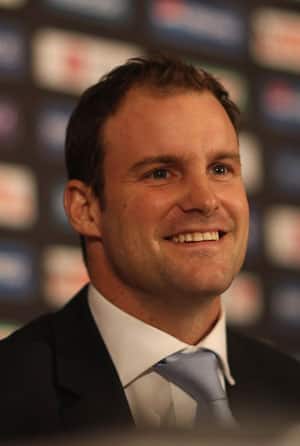 India captain Mahendra Singh Dhoni and England counterpart Andrew Strauss were united in their praise of Sachin Tendulkar with the batting great on the verge of another landmark record.

The India star needs just one more century to become the first batsman to score a 100 international hundreds — he already has 51 in Tests and 48 in one-day internationals, both records.Tendulkar could create yet more cricket history when England and India meet in the first of a four-Test series at Lord’s starting here on Thursday, in what will be the 2,000th Test ever played and the 100th between the two countries.

His stellar international career started when he was just a 16-year-old back in 1989.

Dhoni, asked what had motivated Tendulkar, who has scored over 14,000 Test runs at an average of more than 56, to keep playing at such a high level for so long told reporters at Lord’s on Wednesday: “I think he loves the game, he has a passion for the game.Every time he turns up on the field he wants to improve his game.

“He may spend one-and-a-half hours on the field, but in that time he makes sure he is learning something, and when he goes back to the dressing room he can proudly say today’s time I utilised to the best.

“He tries to keep it very simple and doesn’t complicate things.Overall, I think he’s an ideal cricketer to look up to, the way he has conducted himself on and off the field, irrespective of the fact that when he made his debut in one year’s time he was a superstar.He has remained the same for the last 21 years.”

Strauss, who has achieved the feat several times, was at a loss to explain why and jokingly said he was annoyed not to be included in the same company.

“I don’t know, you’d have to ask them. I have scored a hundred and I’m not on your list which is very disappointing to me obviously!” the left-handed opener told reporters.

“I’m sure Sachin would love to score a hundred here and it’s our job to make sure that doesn’t happen.”

Tendulkar has managed a mere 149 runs in seven Test innings at Lord’s at an average of just 21.28 and with a top score of 37.The 38-year-old, who missed India’s recent tour of the West Indies, had been working to put that right by having net sessions at the ‘home of cricket’ since the start of the month, where the bowlers have included former England left-arm spinner Monty Panesar.

Asked if the interest surrounding Tendulkar’s potential 100th hundred was proving a distraction, Strauss replied: “It won’t be a distraction for us. We have plans in place for him as we would for any other batsman. If it’s a distraction then it’s a great thing for us.”

Strauss though was in no doubt about Tendulkar’s qualities, both as a player and a person.

“He’s been a fantastic ambassador for the game. You look at his statistics and they speak for themselves — you don’t have to rush out with platitudes or superlatives because it’s all there.”The longevity, consistency shows he’s one of the greatest ever.As a man and an ambassador, there’s no one better.”