KKR will hope that they have the momentum to win the remaining matches from here.

Delhi won by 5 wkts
Man of the Match: Mayank Agarwal

Kolkata Kinght Riders (KKR) beat Chennai Super Kings (CSK) by seven wickets after an incredible batting performance by Robin Uthappa and Andre Russell. Uthappa scored an excellent half-century and Russell came down the order, with his lusty blows got his side over the line, scored a fifty along the way as well. With this win KKR now have nine points in eight matches and move to third place in the table.  Pawan Negi was the pick of the bowlers for CSK as he finished with figures of one for 22. Full updates: KKR vs CSK

Gautam Gambhir was dismissed early for 19, but he made an impact after hitting a couple of sixes. Manish Pandey and Surya Kumar Yadav were dismissed one after the other and KKR were in a slight spot of bother. But Uthappa and Russell took the game completely away from CSK after they put on a gem of a partnership. Russell got to his half-century after hitting Dwayne Bravo for two huge sixes in the 17th over.  Full Scorecard: KKR vs CSK

The match went down the last over but KKR never looked in any sort of trouble through the run chase. Ronit More was entrusted to bowl the final over but with six needed of the over, KKR got there without much trouble. It was a little tense but More, in spite of bowling well could not restrict the batsmen. Gautam Gambhir reaches 3,000 runs in Indian Premier League

CSK’s innings did not get off to the ideal start as they lost Dwayne Smith off the first ball of the innings. Suresh Raina then joined Brendon McCullum at the crease. His 10-ball eight got him past 3,500 runs in IPL and became the first player to do so. He then played a rash shot to get out off the bowling of Umesh Yadav. McCullum was playing a blinder amidst all this and Gautam Gambjir decided to being the veteran Brag Hogg into the attack in the sixth over when CSK were 64 for two. Suresh Raina completes 3,500 runs in Indian Premier League

Hogg trapped McCullum in front of the first ball of his spell for a 12-ball 32 and Faf du Plessis was stumped for 20 four deliveries later. Hogg’s double strike had gotten KKR right back into the match after the initial carnage. CSK skipper MS Dhoni did not last long either as he dragged a ball on to his stumps to give leg spinner Piyush Chawla his first wicket.

Hero from the previous match Bravo and Ravindra Jadeja built a steady partnership for the sixth wicket. They put on run-a-ball 57 to get CSK to a decent position as Bravo was bowled off the bowling of Andre Russell. New Batsman Pawan Negi got into the act immediately as he chipped the ball over first slip off the very first delivery he faced for a boundary.

Jadeja however carried on and he managed to get CSK over 150. Negi too was proving to be quite a handful as he smashed Pat Cummins for a couple of boundaries in the 18th over.  Jadeja was looking to take on Hogg in the 19th over but he holed out to square leg. Negi however sjhowed no signs of slowing down as he dispatched Hogg for a six over long off. But he was bowled in the next ball after Hogg foxed the youngster with a quicker delivery. Hogg meanwhile finished with figures of 4 for 29.

Earlier, KKR had won the toss and elected to bowl first. KKR go into the match with the same playing XI from their previous match. CSK, on the other hand, were forced to make a a change as R Ashwin injured his finger in the earlier game and as a result will match this and the match to follow. Pawan Negi took Ashwin’s place and Ishwar Pandey makes way for debutant Ronit More.

Man of the match: Andre Russell 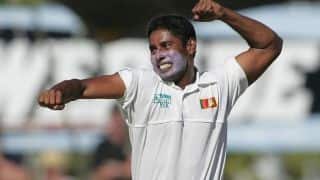