Fleming credited the chinaman bowler with taking the game back to the Knights' camp, KKR opener Robin Uthappa hailed him for his fitness.

Kolkata: While the shortest format of cricket may mostly be seen as a game for youngsters, Australian spinner Brad Hogg has proved age is no barrier as he spun the Kolkata Knight Riders (KKR) to a seven-wicket victory over Chennai Super Kings (CSK) at the Eden Gardens here.

At 44, and the oldest player in the Indian Premier League (IPL) history, Hogg took a match-best Four for 29 on Thursday night, earning rave reviews both from his teammates and opponents. If CSK coach Stephen Fleming credited the chinaman bowler with taking the game back to the Knights’ camp, KKR opener Robin Uthappa hailed him for his fitness.

“Some of us find it difficult to keep up with him. He is lot of fun on the field and keeps everyone in splits; he keeps fooling around and is definitely the prankster of the team. But when it comes to bowling, he is extremely effective, brings in lots of experience and positivity,” said Uthappa.

“It’s good to have him when we miss someone like Sunil Narine but if we have both of them together, we will have the lead bowling attack. Age is just a number, I see Hogg more energetic than a 20-year-old. He is one of the fittest guys in our team, hitting the gym almost every day despite the hectic travelling and schedule.”

Filling the void created by the absence of mystery spinner Narine, Hogg made an immediate impact when introduced into the attack, taking the vital scalps of New Zealand power-hitter Brendon McCullum and South African Faf du Plessis in his opening over. He also scalped Indian all-rounder Ravindra Jadeja and youngster Pawan Negi to restrict a marauding CSK to 165 for 9. Interestingly, Negi was born just a year before Hogg made his first-class debut in 1994.

“Coming from the cold somewhat, he has delivered two great performances. Excellent performance, he turned the game back in Kolkata’s favour when it was frisking away from them,” said Fleming. “His wickets of McCullum and du Plesis were certainly two major blows and that over proved to be crucial. He was certainly the main player for and deserves applause.”

Hogg last played in January in the Big Bash League. He finished with impressive bowling figures of One for 18 against CSK on Tuesday in Chennai in his first outing this season after being forced to watch the first three weeks from the bench. 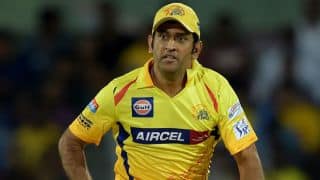