In six overs, Kolkata are 30 for one.

Robin Uthappa has anchored Kolkata Knight Riders’ run-chase of 143 against Sunrisers Hyderabad in their Indian Premier League (IPL) 2014 match. Kolkata had lost Gautam Gambhir early, but they have recovered to 30 for one in six overs. Manish Pandey is batting with Uthappa. Catch the live blog of the match here.

Karn Sharma came on to bowl the fourth over and the batsmen could only get a couple of runs in that over. Darren Sammy then came on for the fifth over and the first ball nearly carried back to him off Uthappa’s bat. Pandey then slapped one down the ground as it was short and there was width. The ball crossed the boundary for four. Steyn then came on and Uthappa skied one over the off-side and Shikhar Dhawan dropped it. Catch live score and ball-by-ball commentary of the match here

But then Uthappa added only insult to injury. He flicked one off his pads to mid-wicket for a six. The fielder there watched it sail over his head as it went into the stands. It was combative cricket 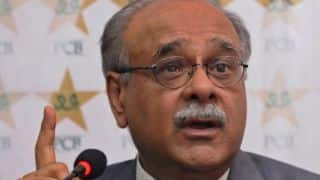 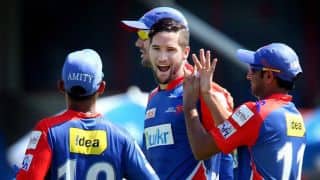