Uthappa and Sarfaraz allegedly had a scuffle after the RCB-KKR match.

“Nothing of that sort has happened… I’ve not received any complaint,” Srinath, who was the Match Referee of the KKR-RCB clash told PTI. A KKR official also rubbished the reports and said: “We’ve not heard anything about it.”

According to reports, KKR opener Uthappa, who had scores of 35 and 9 in two matches, allegedly had an altercation with the 17-year-old RCB recruit from Mumbai and went on to the extent of “holding him by the collar”.

The incident is said to have happened behind the sight screen as RCB’s AB de Villiers and Ashok Dinda rushed to the rescue of their fellow player. Later at night Srinath reportedly summoned Uthappa and KKR CEO Venky Mysore, with RCB’s de Villiers attended the meeting. Though it is learnt that Uthappa has sought an apology for the incident but Srinath denied having any knowledge of this. 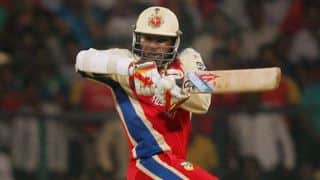