The Indian cricket team will play the first game of the five-match ODI series against South Africa on June 9 at the Arun Jaitley Stadium. Dravid addressed the media ahead of the match to talk about his team’s preparation.

He defended the absence of seasoned campaigners from India’s first assignment after IPL 2022. Rohit is our all-format player. It would be unwise to expect everyone to be available all the time. We want them to be fit and fresh as well. There would be times where we would have to rest our big players,” said Dravid.

In Rohit’s absence, stand-in captain KL Rahul will lead the team in all five matches. Dravid stated, “We are looking for good starts. We know our top 3. If it is high scoring games, we would want them to maintain that strike rate throughout but there would be tricky matches too. We have the kind of quality at top 3, who can deliver.”

The Indian coach also praised fast bowler Umran Malik who impressed everyone with his performance in the IPL 2022. He said, “Yeah, it is exciting. He certainly bowled quick and with pace. Another thing which has been interesting for me watching the IPL from the outside is the number of Indian bowlers bowling fast.

“And obviously, being a coach of all three formats of the game, I would love to see that translated into the longer formats of the game. But it is brilliant in terms of watching Umran in the nets, you can see that he has got that pace,” added Dravid.

The coach believes that age is on the Umran’s side and he will only get better with time. Dravid remarked, “Obviously, he is learning. He is a young boy and he is getting better, and improving. The more he is able to play, the better he is going to get. From our, perspective, very happy to have someone like him in the mix.”

“We have to see how much playing time we can give him, we need to be realistic, we have a large squad, it is not possible to give everyone playing XI time. I think I am certainly someone who likes to have that consistency, give people time and let him feel settled in the positions. It would be interesting time to see how much playing time we give to Umran, we also have Arshdeep here who is brilliant as well,” he concluded. 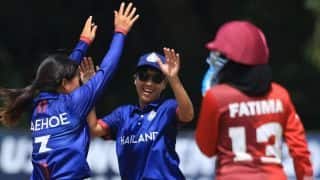