India have beaten Zimbabwe by nine wickets in the fourth One-Day International (ODI) at Bulawayo. It was a day where one witnessed yet another Zimbabwean collapse and the target was just too small to challenge the Indians and they took a 4-0 lead in the series without much trouble. Having won the series, India decided to introduce Cheteshwar Pujara and Mohit Sharma to one-day cricket. Meanwhile Zimbabwe were unchanged. 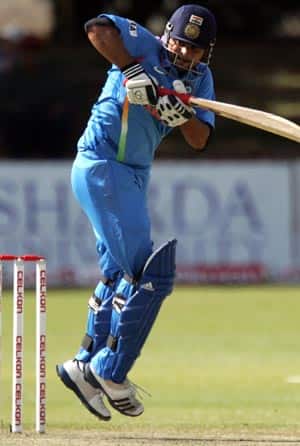 India beat Zimbabwe by nine wickets in the fourth One-Day International (ODI) at the Queens Sports Club, Bulawayo. It was a day where one witnessed yet another Zimbabwean collapse and the target of 145 was just too small to challenge the Indians and they took a 4-0 lead in the series without much trouble. Having won the series, India decided to introduce Cheteshwar Pujara and Mohit Sharma to one-day cricket. Meanwhile Zimbabwe were unchanged.

After being put into bat, Zimbabwe were troubled early by Mohit and Shami Ahmed. The debutant Mohit went on to pick his first international wicket when he induced an edge off Sikandar Raza’s bat and Dinesh Karthik completed an easy catch.

The first 20 overs were a nightmare for Zimbabwe as they lost wickets in a heap and were reduced to 47 for five at one stage. Even the spinner Ravindra Jadeja came in and did the damage as he sent the well set Vusi Sibanda back to the pavilion. The possibility of a score under a hundred loomed large as Elton Chigumbura joined the out of form Malcolm Waller in the centre.

Knowing the enormity of the task before them, Chigumbura and Waller set off on a recovery job. While Waller was sedate and was trying to work his way back into some kind of form, Chigumbura was more proactive and scored at a good rate. Waller did get on with things when he smashed a six of Shami. But, Mohit returned to the attack and scalped him in the 37th over.

From there on, Zimbabwe’s fight effectively ended as Chigumbura found no support from the tail His unbeaten fifty was the only highlight of the innings. They were eventually bowled out for 144. Yet another day, yet another collapse!

On debut, Pujara was given a chance to open the innings and was off the mark in the first over. Rohit Sharma hasn’t had the best time on this tour and was circumspect early on. Pujara did manage to play a good stroke or two, but was bowled by Tendai Chatara when he was on 13.

Since the target was small and the series in the bag, India decided to send Suresh Raina to partner Rohit in the centre. It seemed to be a sensible move as both these batsmen would have wanted to get a few runs and gain some confidence.

Rohit continued to play patiently and got to his fifty off 84 balls. Raina was much quicker to reach the mark as he got there in 60 balls. Once India were within sight of victory, they took the batting powerplay in the 29th over. They then got the required 26 runs within the bext two overs.

On this tour, Rohit and Raina were the only real worries, but this should settle things for them. Zimbabwe have been left with a lot to think The fifth ODI would be played on Saturday at the same venue.

Man of the Match: Mohit Sharma