India were steady after early struggles and the score was 71 for two in 16 overs.

Rohit Sharma and Ajinkya Rahane were looking in great touch after back-to-back early wickets had left India in deep trouble at 19 for two and then the two batsmen were moving along nicely and both batsmen were playing some excellent shots and the two batsmen at the crease were making merry against struggling bowlers Chris Jordan and Ben Stokes. They brought up their fifty partnership in the 16th over. Rohit bought his first six off a free hit after Ben Stokes was harshly adjudged by Paul Reffiel to have overstepped.

Earlier, Rohit Sharma finally broke the shackles and started freeing his arms a a little which resulted in a couple of sparkling shots to the boundary. Ajinkya Rahane was looking positive right from the word go and is looking to tick away singles and his running has been sharp so far. As the tormentors Jimmy Anderson and Chris Woakes were replaced with Chris Jordan and Ben Stokes, India sensed their opportunity and were looking to increase the going rate. Rahane played a lovely straight drive off Stokes in his first over. 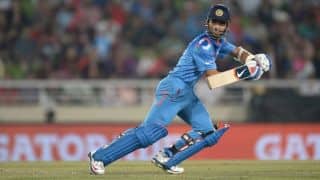