The journalist was not happy with Rohit Sharma taking a break from the South Africa T20I series.

New Delhi: Cricketers are arguably the most popular celebrities in India. They are widely respected and enjoy a massive fan following. However, one can never have all fans and zero critics. No matter how big a cricketer is, there will always be a few people who will not be impressed by the player. That’s completely fair though as every person is entitled to have his opinion.

Fans can be immature at times and cross limits on social media, but one expects better professionalism from a senior journalist. In a video that’s going viral on social media, a popular journalist can be seen using foul language against Rohit Sharma. The journo was not happy with Rohit Sharma taking a break from the South Africa T20I series. He went to an extent that he even body-shamed Rohit Sharma live.

“Where is your Rohit Sharma? He is enjoying a vacation. Bring him to the cricket field, he is a cricketer. But rather he is busy enjoying his vacation. He is a bhagoda. Has become like (Navjot Singh)Sidhu, who is avoiding playing cricket. He is avoiding facing Rabada. If he has the guts, he should come and play.

“He is resting for what? Which injury? He is seeking rest after every 20 days. Rohit Sharma is not playing in India’s bilateral series The runs are not coming, he is not able to move in the field, has bloated stomach (gestures), but is being called superstar,” said the journalist.

Meanwhile, Rohit is currently in England where he will lead India in one Test, three ODIs and as many T20Is against the hosts. India will also play a 4-day warm-up game against Leicestershire from today, June 23. 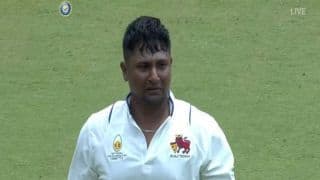