Rohit slammed a mammoth 264 against Sri Lanka in the fourth ODI at Kolkata on Thursday.

Richards expressed his feelings to the Indian batsman on Twitter, asking him to keep raising the bar.

The Indian batsman replied to the West Indies’ legend, saying it is an honour.

.@vivrichards56 It’s an honour sir thank you so much

According to IANS, getting a boost after his world record 264 against Sri Lanka in an ODI here Thursday, Indian opener Rohit Sharma said a couple of failures would not stop his cricket. The 27-year-old, who made his ODI debut for India in 2007, has been in and out of the team as he failed to maintain consistency. In the past, he has often struggled in the middle.

However, after his swashbuckling display, Sharma was brimming with confidence. “You have to accept the failure and success and you keep moving on. That’s what I’ve done. A couple of overseas failures will not stop my cricket. My cricket and my hard work will still remain on the track. I will keep working as hard as ever,” Rohit said. 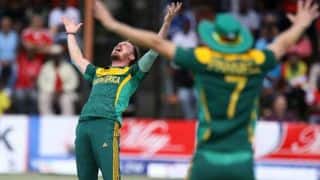