Rohit Sharma took charge following Shikhar Dhawan’s dismissal and brought up his 28th One-Day International (ODI) during the fifth ODI between India and Australia at Sydney on Saturday. He is playing on 50 from 60 balls at present. It is the final ODI of their ongoing five-match ODI series. Having sealed the series by winning the first four matches, the final game is just a formality. While India is trying their best to regain their pride Down Under, Australia will aim to white-wash the young Team India by winning the Sydney game. Batting first, Australia posted a total of 330. In reply to that, India have lost their first opener Dhawan for a quick 56-ball 78 in the 19th over. Live Cricket Scorecard: India vs Australia 2015-16, 5th ODI at Sydney

After that dismissal, Virat Kohli who scored a hundred in the last two games also failed to deliver in this crucial time. He became John Hastings first wicket of the day, when the latter dismissed him on the second delivery of the 21st over.

Rohit has been in a fantastic form lately. He scored two consecutive centuries in teh first two matches of this ODI series. However, that was not enough for his side to beat the hosts. Earlier in the day, David Warner and Mitchell Marsh scored centuries helping Australia post the big total. While it was Warner’s 5th century, it was Marsh’s first-ever international ton for Australia. Marsh remained unbeaten on 102 from just 84 balls. His explosive innings was inclusive of nine fours and two sixes. On the other hand, Warner fielded nine fours and three sixes in his innings of 122 from 113 balls. 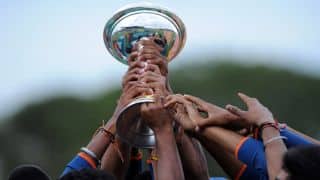