Rohit scored his first ton in 115 balls and scored the rest of the runs in 38 balls.

Rohit Sharma was awarded Man of The Match in the second ODI against Sri Lanka in Mohali. Rohit scored an unbeaten 208 runs and took the total to 392. Rohit played a supportive role until Shikhar Dhawan got out. He then reached the ton in 115 balls and scored the rest of the runs in 38 balls. This is Rohit s third ODI double-century and maiden as a captain. Rohit also became second captain to score a double-hundred after Virender Sehwag.

“It was a great day. Winning the game was important for me and for the team. After the loss at Dharamsala it was necessary to come back and and we did it superbly. It was great to get the total we got because there was a bit of dew in the end. If I am not wrong, in the first two 200s as well I got the century in the 38th over and I kept telling myself to hold my shape and hit through the line. I did pretty similar things in the earlier ones too – getting 50 off 70 balls. This wicket was superb to start off, the longer I stayed the easier it became to bat on.

In the end, getting to 392 was important. I think that 264 is very close to me. People keep asking me to pick my favourite double-century but I really cannot pick one. That one against Australia was the series decider, the one against Sri Lanka earlier was one where I was coming back from an injury and this one was necessary to keep the series alive.”

‘She is my strength’

“I am sure she(Ritika) would have liked this gift from me. She is my strength and keeps supporting me. This is one good part about having your family around, we already go through a lot of stress and it makes our lives easier. The more important thing is that we won the game and right from the start we were right on top and gave nothing easy. We know what to do now in Vizag, the conditions will be different but we need to adapt and attack.

Not the ideal conditions for him(Washington) to debut but this is how he will learn. As a team management we want to back players like him and I am sure he must have learnt a lot from this game, playing with the wet ball and I wish him all the luck.” 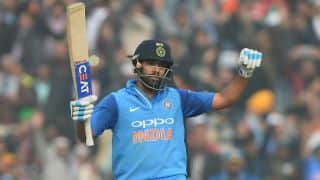