Mumbai have made a cautious start and lost Rohit Sharma's wicket, score 16 for one.

In the the 16th match of the Indian Premier League (IPL) match between Delhi Daredevils (DD) and Mumbai Indians (MI), Rohit Sharma’s men made a cautious start in the first over, which was by the wily left-arm spinner Shahbaz Nadeeem. Seven runs came of the first over without any boundaries.

Rohit and his opening partner Aditya Tare have misfired in the three matches they have played so far and the duo were looking for singles of every ball. On one such occasion, the batsmen tried to cross over for a risky single and Rohit was far too late to get off the block and was caught short of the crease by bowler Mohammad Shami’s direct hit. Tare’s flick of the next ball nearly found the short-fine leg fielder’s hands but it went for a boundary.

Corey Anderson was the new man in and Kevin Pietersen turned to JP Duminy’s off-spin for the third over and it was a tidy one. 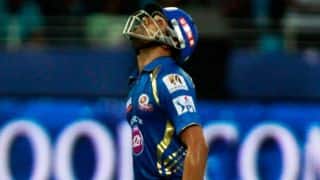 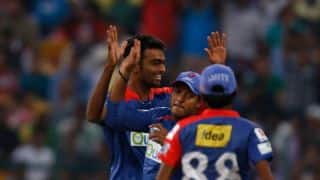