Currently, India are 21 for the loss of a wicket in 6.1 overs with opener Shikhar Dhawan batting on four.

Indian opener, Rohit Sharma was dismissed for mere 16 by Tendai Chatara after being caught by Sikandar Raza, against minnows, Zimbabwe, in their final group stage encounter of their Pool B, match 39 of the ICC Cricket World Cup 2015 at Eden Park in Auckland on Saturday. Currently, India are 21 for the loss of a wicket in 6.1 overs with opener Shikhar Dhawan batting on four and Virat Kohli coming in. Live Updates: India vs Zimbabwe

Earlier, India skipper, MS Dhoni, won the toss and elected to field first as Zimbabwe were bundled for 287. India bowled out an opposition for the sixth consecutive time in the tournament. India are fielding an unchanged squad from their previous game win against Ireland at Seddon park in Hamilton and so are Zimbabwe. The result of this match would be invariable as India have already qualified to the quarter-finals and would be facing Bangladesh on March 19 at the Melbourne Cricket Ground (MCG), while Zimbabwe have been knocked out of the competition with just a single win from their five games so far. Live Scorecard: India vs Zimbabwe 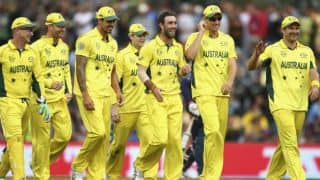