Former India batsman Gautam Gambhir believes that Rohit Sharma should seek out Rahul Dravid and Sachin Tendulkar and get the legendary pair to mentor him so he can realise his full potential at Test level.

While ranked No 2 in ODI cricket – he has four double-centuries in the format – and with several T20I records to his credit, Rohit remains an unfulfilled talent when it comes to Test cricket. From 47 innings, he averages 39.62 with three centuries and 10 half-centuries.

In his latest chance in Tests, which was India’s tour of Australia in December 2018, Rohit scored 106 runs from four innings. In his first Test in nearly a year, He batted well to get to 37 before a needless shot across the line cut him off and raised questions, once again, over his temperament.

Rohit then missed out in Perth with injury and returned for the MCG Test where he made a fluent unbeaten 63 and 5 – an innings that ended with a poke to slip. He then flew home to be with his wife for the birth of their first child.

(READ: Is India vs West Indies the new India vs Sri Lanka?)

India next play Tests in the West Indies later this month, and given his outstanding World Cup this summer, Rohit should have moved past Hanuma Vihari for the No 6 spot.

Gambhir, writing in today’s Times of India, felt that the mentorship of Dravid and Tendulkar could make Rohit a proper Test batsman.

“Rohit Sharma is batting as if there is a GPS on his bat with location settings filtered for the white cricket ball,” he wrote. “So flawless has been his display that even a coaching manual is looking like a grey market “first copy”. I think this is the moment when Rohit needs someone in his ears to convey the importance of this form. He needs to convert this into big and consistent scores.

“Then, he needs to carry this batting form into Test cricket. I’d go on to say that if someone like a Rahul Dravid or Sachin Tendulkar mentors him for a few months, we may get a completely polished, Test-ready batsman. Sometimes Rohit just seems bored in Test cricket. A few words of advice by these legends may transform that. If things start rolling for Rohit, just imagine India’s Test line up with [Cheteshwar] Pujara at number three, Virat [Kohli] at 4 and Rohit at number 5.”

India play the final T20I against West Indies in Guyana today, and then head into the ODI leg of their tour.

The first Test starts on August 22 at North Sound. 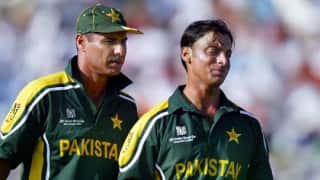