Rohit Sharma (33 from 14 balls) and Glenn Maxwell (37 off 14 balls) cameos powered Mumbai Indians to 202 for six against Rajasthan Royals in the final of the Champions League T20 at the Feroz Shah Kotla, Delhi on Sunday. 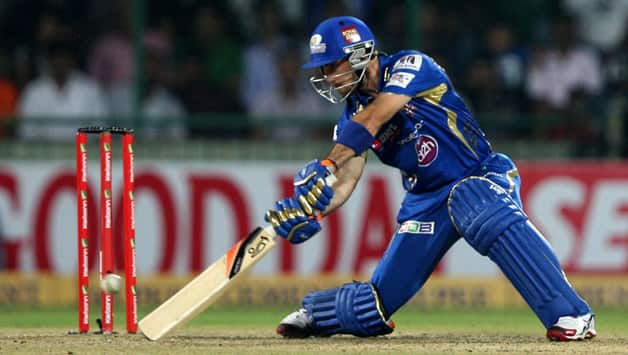 Rohit Sharma (33 from 14 balls) and Glenn Maxwell (37 off 14 balls) cameos powered Mumbai Indians to 202 for six against Rajasthan Royals in the final of the Champions League T20 at the Feroz Shah Kotla, Delhi on Sunday.

This was the pattern of their innings: a breezing start, a lull in the middle overs (till the tenth over), then there was a period where Mumbai took Rajasthan’s bowling apart. The wreckers-in-chief — Rohit , Kieron Pollard (15 off 10 balls) and Maxwell. The last 10 overs produced a whopping 142 runs.

Mumbai got 46 in the first set of powerplay overs  (the breezing start phase)  at the loss of Sachin Tendulkar’s wicket. The next set of four overs yielded only 14 runs (the lull). Mumbai looked to be conservative trying to look for singles and preserving the wickets. Leg-spinner Pravin Tambe was in good rhythm and didn’t allow Smith with a pressure-releasing delivery. The trajectory was flat with copious amount of spin to just keep the batsmen in check. Ambati Rayudu, batting at No. 3, was trying to play too many shots but he wasn’t timing the ball. In Kevon Cooper’s first over, Rayudu went for a cut which beat him. There was a huge noise but the ball seemed to have hit the flimsy moth on its way.

Smith’s began his innings with a six off the front foot in the first over of the innings off James Faulkner. He was taking his chances in the first six overs. Faulkner was hit straight over his head while Rahul Shukla [in the fourth over of the innings] was hit off the frontfoot towards mid-wicket for a boundary. After the breezy start Smith looked a tad circumspect looking out for singles. In the 11th over, he welcomed Shane Watson with three boundaries — two short balls were pulled with consummate ease while the second ball was lifted over covers for a boundary.

Smith looked to slog-sweep Tambe in his third over but failed to connect the shot. Like the previous day he missed the ball and was bowled. Rohit, the Mumbai captain broke free at the start of his innings hitting the third ball he faced behind square-leg for a six off Stuart Binny. Rayudu pulled Binny behind square for a boundary while Rohit caressed the final ball towards covers. The 13th over from Binny went for 16 runs which helped Mumbai to get the much-needed momentum.

Rayudu charged down Tambe twice and hit him above his head for a boundary. Rayudu tried to do the similar thing in the final over from Tambe and succeeded once. The Mumbai No.3 eventually missed Tambe’s straighter delivery, bowled slightly short of length and quicker, and was out bowled. He scored 29 from 24 deliveries.

Rohit was in sublime touch. He was toying with the Royals balling. He nullified Shukla’s yorker length delivery by paddling him past short fine-leg in the 15th over. The final ball was timed past backward point for a four which gave an impetus to the Mumbai innings.

Kieron Pollard was used his brute force to bludgeon Cooper in the 16th over of the innings which cleared long-on. Rohit picked Cooper’s slower ball and deposited it over long-on.

The wicket of Pollard in the following over gave Rajasthan some respite. Or did it? Glenn Maxwell, who was brought in the team in place of Mitchell Johnson made an immediate impact by flicking Faulkner for a boundary off the first delivery and then a six followed.

Rohit fell trying to hit Shukla over mid-wicket but failed to clear the deep fielder. Maxwell then took over the mantle of the aggressor and hit Shukla straight over the sight-screen for a six. A four past fine-leg followed which compounded Dravid’s problem. Dinesh Karthik started his innings with a six over mid-wicket. The over yielded 20 runs.

Maxwell showed his pyrotechnics in the penultimate over of the game off Faulkner by playing a reverse scoop that went past short third-man. The next delivery was scooped over backward point for a boundary. A run-out of Maxwell was a consolation prize for Rajasthan but Karthik and Harbhajan ensured that Mumbai got past 200-run mark.

There were two occasions where the two greats: Dravid and Tendulkar were given respectful ovations by their respective teammates. Before Rajasthan Royals took the field there was an emotional moment where Rahul Dravid was given a guard of honour by the team before they took the field. Twenty-five later it was the turn of Mumbai Indians team to give their champion batsman a guard of honour but not before he played three exquisite boundaries.

Tendulkar kickstarted his innings with a cover drive off James Faulkner in his second over. The celebrated Mumbai opener threaded the gap between covers and extra-covers. In the fifth over he glanced Watson fine which beat short fine-leg for a boundary — his second. The third boundary of his innings was a cover-drive off the highest quality. Tendulkar held his position for that extra second for the photographers to click the snapshot. The next ball was an inswinger which jagged back in and beat Tendulkar neck and crop for 15 off 13 balls.

The question remains: Which of the two legends will walk away with the trophy?