A late order surge from Rohit Sharma and Harbhajan Singh helped Mumbai Indians score 139 for five in 20 overs against Chennai Super Kings in the 49th match of the Indian Premier League (IPL) at the Wankhede Stadium. 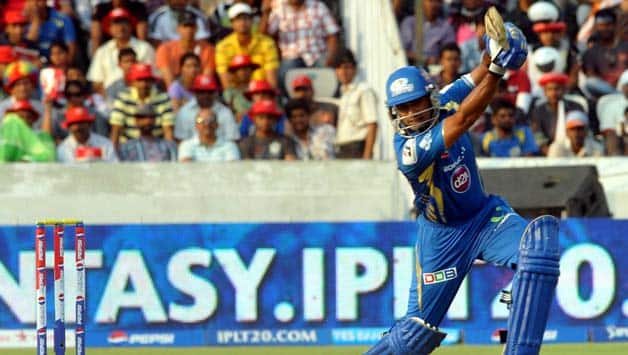 A late order surge from Rohit Sharma and Harbhajan Singh helped Mumbai Indians score 139 for five in 20 overs against Chennai Super Kings in the 49th match of the Indian Premier League (IPL) at the Wankhede Stadium.

The duo added 57 off 29 deliveries which was refreshing considering the stranglehold Chennai bowlers had put on the Mumbai batsman. The 18th and 20th overs bowled by Ben Laughlin went for 13 and 19 runs which gave Mumbai’s final total an air of respectability. Rohit top-scored with unbeaten 39 off 30 balls and an 11-ball sortie from Harbhajan yielded him 25 runs.

Chennai Super Kings bowlers put Mumbai batsman under pressure right from the first over. Runs were dried down and Mumbai could not get a move on. The regular fall of wickets made stalled Mumbai’s progress.

Mohit Sharma gave away 20 off his four overs, Jadeja picked up three wickets in his four overs giving away 29 runs, Ravichandran Ashwin shelled out 11 off his two overs. Dwayne Bravo conceded 19 off his three while Chris Morris’s three overs went for 14. Laughlin was taken to the cleaners. He went 46 off his four overs.

The first Powerplay overs yielded only 32 runs. Mumbai played 24 dot balls during the first six overs: a staggering 66% of the balls were not scored off when the field was up. Mohit Sharma bowled an incessant line around off-stump with subtle swing. Tendulkar played out six dot balls in Sharma’s first over.

Morris was bowled the third over and bent his back. The feature of Chennai’s bowling was the tight line and length.

Chennai gave away nothing. That forced Tendulkar to play across the line to Jadeja. In the next over off Bravo, the new West Indies ODI captain, his compatriot Smith attempted an impetuous pull which went straight up. Bravo held the catch easily and did a small jig.

Kieron Pollard followed soon as he played an expansive shot off his third delivery off Jadeja. He was caught at long-on. Mumbai scored 47 in ten overs.

Karthik, who made his comeback in the Indian ODI team for the Champions Trophy, took the attack to Jadeja in the 12th over. A sweep went for a boundary past short fine-leg, a slog-sweep went over deep mid-wicket for a six and the reverse-sweep went past short third-man for another boundary. Karthik played another slog-sweep, which was caught by Suresh Raina at deep mid-wicket. Kartik scored a run-a-ball 23.

MS Dhoni introduced Ravichandran Ashwin in the 14th over. He was bowling a lot slower. Ambati Rayudu was castled when he treid to pull Ashwin and missed the ball together.

Chennai Super Kings are currently joint-record holders of winning most consecutive matches in the IPL history (7), a record they share with Royal Challengers Bangalore. Mumbai Indians won the toss and decided to bat first.

Mumbai brought in left-arm fast bowler Pawan Suyal in place of Dhawal Kulkarni who was unwell. Chennai made two changes roping in Ben Laughlin and Murali Vijay instead of injured Albie Morkel and Wriddhiman Saha.