Rohit Sharma: I will try to get a triple century

Rohit Sharma: I will try to get a triple century

Even as he said scoring a 300 might be possibility, Sharma asserted his 264 will always remain special.

Having scored a record-breaking ODI double century at the Eden Gardens here against the visiting Sri Lanka, India batting star Rohit Sharma said staying at the crease for the entire 50 overs was the most pleasing thing.

“The fact that I went on to bat for 50 overs was very pleasing because I have been working on batting as long as possible and I am happy that I could do so and glad that the team won,” said Sharma who, besides becoming the only batsman to score a double century twice, also pocketed the highest individual score with his epochal 264.

Even as he said scoring a 300 might be possibility, Sharma asserted his 264 will always remain special. “I will try to get there [a triple century], but as of now I will take the 264,” said the Mumbaikar who propelled India to a mammoth 404/5 to trounce the Sri Lankans by 153 runs.

The middle order batsman admitted that he contributed towards the run-out of skipper Virat Kohli with whom he stitched a 202-run partnership.

“It was my mistake but I did not allow that to deflect my focus and kept on telling myself to carry on,” said Sharma, who hit 33 fours and nine sixes. Virat Kohli: I don't think this record is getting broken anytime soon 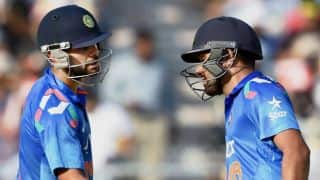