Jasprit Bumrah has been amongst India's best players since his international debut in January 2016.

Jasprit Bumrah has been amongst India’s best players since his international debut in January 2016. Indian selectors rewarded the limited-overs bowling spearhead with a Test berth for South Africa. Bumrah, who is renowned for his variations especially the searing yorkers, is the fifth specialist pacer in the Test squad.

On the eve of the first ODI against Sri Lanka at Dharamsala, India’s stand-in skipper Rohit Sharma cited Burmah’s selection in Test squad as a lesson for youngsters.

“And over the last year or so, how he has improved himself, on his bowling and fitness as well. It is a lesson for many cricketers that if you put in the hard yards, you will get rewarded. And Bumrah has been rewarded for the things he has done in the past few years,” said an elated Rohit.

Bumrah is amongst the best bowlers in limited-overs cricket. He is the No. 3 and No. 1 in ODIs and T20Is respectively. Rohit, Bumrah’s IPL skipper, has seen his grow from close quarters. Bumrah has been Rohit’s go-to man for Mumbai Indians in the IPL and same is set to continue when they don the similar roles for their country.

“He has played with me for MI and I have only seen him grow every game. Every series that he has played he has come up new strategies, new plans. It is good to see he has matured as bowler now.

“He understands what he needs to do and what team expects out of him. He is a very focussed guy, very disciplined in terms of his work ethics. This is what is giving him the results on the field.

“He had a good month and a half time off and he went to NCA, worked on his body again and rejuvenated, he looks a lot fresher now. Hopefully, he can do the job for us what he has been doing in the past few months or so,” Rohit added.

Rohit is one of the best batters in the side, but in the absence of regular skipper Virat Kohli, he has an extra responsibility to instill confidence in the younger members of the side. Rohit believes that those on the bench must be given fair amount of chance to prove themselves.

“It is important to give these guys fair amount of games before they prove themselves. It is important they get enough games and gain confidence. There are guys like Shreyas (Iyer), Manish (Pandey), Kedar (Jadhav) and (senior pro) like Dinesh, who haven’t got enough games on the trot. As a part of the team management, we want to make sure that they get ‘N’ (certain) number of games continuously and and then it is up to them what they do with that opportunity.

“They completely understand that they need to perform as there is a lot of competition in the middle-order. In fact everywhere, and they have to grab the opportunity and make it to the 11. We don’t want to put any pressure and make sure that they don t carry any burden when they walk out to the field, ” Rohit added. 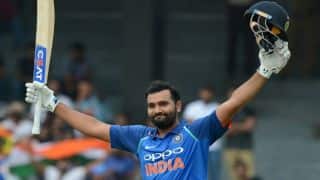 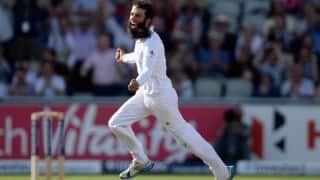