Sri Lankan bowlers put up a bleak performance in the second session of Day Three as India built a 302-run lead at Nagpur.

Sri Lankan bowlers put up an ordinary performance in the second session of Day Three, as India built a 302-run lead at Nagpur. Ajinkya Rahane, who has not scored a half-century in Tests since his century in Sri Lanka in August, was the only Indian batsman to depart. Virat Kohli put up yet another big partnership with Rohit Sharma. India reached 507 for 4 before the end of the session; Kohli (170*) and Rohit (51*) will resume batting in the last session.

Sri Lanka’s poor fielding helped Kohli collect more runs. India lost Rahane soon after they came back from lunch. Rahane made room to hit the short ball hard to point, where Dimuth Karunaratne took a simple catch to remove the batsman for 2. Rahane kept on struggling at home, as his last significant innings came in August. On a pitch where three centuries and a half-century have been scored, more was expected of the experienced player.

Rohit, on his comeback, played exceptionally well and scored his ninth half-century. This was his first innings since the one against New Zealand in Indore. He has scored four fifties in his last five Test innings. Before the end of the session, Kohli and Rohit put up a 97-run unbeaten partnership. India still have batsmen such as Wriddhiman Saha to come out and add more runs.

Sri Lanka’s bowling and fielding remained below average. So far in the Test, the visitors have failed to consistently dominate India. India would like to build a gigantic total from this point before declaration. Dilruwan Perera was the only successful bowler. Dinesh Chandimal also tried Dimuth Karunaratne with the ball. 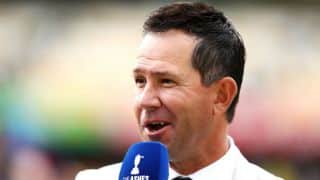 Ricky Ponting: Steven Smith potentially one of the best batsman world has seen 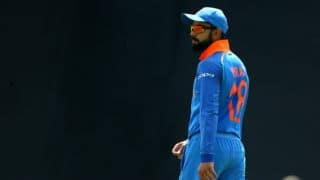 Virat Kohli likely to be rested in ODIs,T20Is against Sri Lanka; Rohit Sharma to captain