Mumbai batsman Rohit Sharma and his India teammate Kedar Jadhav were ruled out of the upcoming Deodhar Trophy one-day tournament due to injuries.

Mumbai batsman Rohit Sharma and his India teammate Kedar Jadhav were on Thursday ruled out of the upcoming Deodhar Trophy one-day tournament due to injuries. While Rohit suffered a minor knee injury, Jadhav was rested due to a stomach ailment, according to the Board of Control for Cricket in India’s (BCCI) medical team. Maharashtra’s Ruturaj Gaikwad will replace Rohit in the India ‘Blue’ side, which will now be led by veteran off-spinner Harbhajan Singh. On the other hand, Jadhav will be replaced by Hyderabad’s Chama Milind in the India ‘Red’ team, which also added Bengal opener Sreevats Goswami for the March 25-29 tournament in Visakhapatnam.

“The All India Senior Selection Committee have named replacements for Rohit Sharma and Kedar Jadhav who have been ruled out of the Deodhar Trophy 2017 due to injuries,” a BCCI statement read. “Rohit suffered a minor knee injury and has been advised rest by the BCCI medical team while Kedar Jadhav has been rested due to stomach related ailment.”

“Ruturaj Gaikwad of Maharashtra has been included in India ‘Blue’ while Hyderabad’s CV Milind has been named in India Red’. Bengal’s Sreevats Goswami has been added to the India Red’ team,” it added. 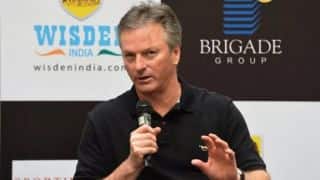 Steve Waugh: See a bit of Ricky Ponting and myself in Virat Kohli's captaincy