India, despite a shaky start in the third ODI, recorded a win their sixth successive in Sri Lanka. Having already pocketed the Test series 3-0, India assured themselves yet another series win. They took 3-0 unassailable lead in the 5-ODI spectacle.

India’s newly appointed vice-captain, Rohit Sharma, demolished Sri Lanka with an unbeaten 124, guiding his team to a 6-wicket victory. Rohit was ably supported by the hero from the second ODI, MS Dhoni. They added 157 runs for the fifth wicket.

Rohit Sharma and Shikhar Dhawan came out, in pursuit of 218, with a clear content. Both batsmen got off the mark with uppish drives. Despite little assistance, Vishwa Fernando and Lasith Malinga managed to keep things tight. After going wicketless in the previous ODIs, Malinga castled the in-form Dhawan for 5, his 299th wicket.

Virat Kohli, who came out at No. 3, was welcomed by a fierce spell from Fernando. Kohli s confidence became his undoing, as he handed a simple catch to Dushmantha Chameera for 3 off Fernando.

KL Rahul soon joined Rohit in the middle, with the latter going great guns. The pair added 42 runs before Akila Dananjaya got the better of Rahul who perished while hooking.

Dananjaya, for the second time in a row, scalped Kedar Jadhav for naught. A reckless sweep-shot on a fuller delivery led to Jadhav s dismissal.

Onus once again lied on Dhoni to get India out from a spot of bother. Rohit, meanwhile, reached his half-century in 64 balls. The pair reached 50-run stand in 56 balls, with Rohit doing most of the scoring. Soon, he tightened the screws hitting boundaries at will to reach his 100 in 118 balls 12th overall.

He also notched up the 100-run stand with Dhoni, with a six over fine leg. The pair struck boundaries and dented Sri Lanka’s hope further. This was also their third 100-plus stand in ODIs.

Dhoni soon reached his fifty in 74 balls with a blistering boundary off Chameera who was playing his 299th ODI.

Despite a 30-minute halt due to fans pelting bottles on the ground, players came back on the field to resume play.

In an over’s time, India marched their way to victory with Dhoni and Rohit not out on 67* and 124* respectively.

The day started with Jasprit Bumrah snatching quick wickets to down Sri Lanka s hope of a big score. It was only Lahiru Thirimanne who kept the home side in hunt for a par score. He, in alliance with Dinesh Chandimal, helped Sri Lanka score past 100 but soon faltered. Thirimanne ended up making 80, while Chandimal departed for 36. Bumrah came back in the death overs and cleaned up the tail to attain his maiden 5-wicket haul in ODIs.

There was also some bad news for Sri Lanka, as a hairline fracture on the thumb put an end to Chandimal’s participation in the series. The fourth and fifth ODI will take place at R.Premadasa Stadium in Colombo.

Man of the Match: Jasprit Bumrah 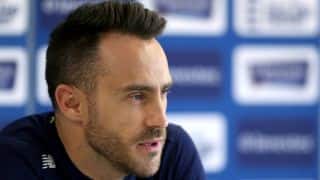 Faf du Plessis: World XI tour is about bringing fans back to stadiums