Rohit Sharma brought up his 23rd half-century for India as he has done an excellent job, playing an uncharacteristic slow innings and taking the team to a respectable position at this point in the game. England had him in knots in the early half of the day’s play but Rohit was patient and painstakingly stitched a good partnership with Ajinkya Rahane. Rahane did not last long and new man Suresh Raina made a fine start, being his usual aggressive self.

Just minutes ago, Ajinkya Rahane was dismissed rather amateurishly by James Tredwell but credit should go to the smart work by Jos Buttler behind the stumps as the Indian batsman was guilty of keeping his foot on the line against a spinner. The line was the umpire’s are and was given out by the third umpire. Ajinkya Rahane was the least bit deterred by the fall of wickets at the other end and is going extremely strong and has been severe on Chris Jordan, caressing a couple of gorgeous drives down the ground. After seeing off the early storm, Rohit has joined in the act too and is batting more freely in the centre. The spinners are in play and India are hardly ruffled by James Treadwell and Joe Root. The duo are closing in on a hundred partnership and this has been India’s best phase on the tour after the end of Lord’s Test. 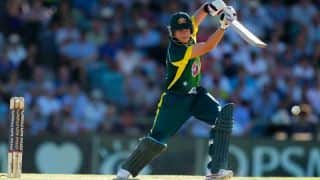