Rohit Sharma has continued his good form to reach another fifty against Australia in the second One-Day International (ODI) of the five-match series at Gabba, Brisbane. He got to the mark of his 61st delivery. He will look to get to another hundred given in the kind of form he’s enjoying. He looked very good on the front-foot as well as back-foot shots. He had a little bit of luck assisting him but for most part his shots looked convincing. He played some flowing drives and his knock also included a few nicely timed cut shots. Once, again he is enjoying a nice partnership with Kohli. India are in a good position in the game at the moment. FULL CRICKET SCORECARD: India vs Australia 2015-16, 2nd ODI at Brisbane

Rohit and Kohli coming of the back a solid 200-plus partnership in the first ODI at WACA played very well. They got past their 50-run stand in quick time, albeit assisted with a bit of luck. Despite the good carry of the deck, at least two edges fell short of the man at first slip. Furthermore, Rohit got a couple of thick, streaky, flashy edges for boundaries including a six of a top edge on a flick. However, for most part their positive approach looked a good way to go. LIVE UPDATES: India vs Australia 2015-16, 2nd ODI at Brisbane

Earlier, India won the toss and elected to bat first. The deck seems to be good for batting but there is quite a fair bit for the fast bowlers to cash in on. There is good amount of bounce and more importantly it is hurrying the batsman a wee bit. India lost the first match quite comfortably despite scoring over 300 runs and they will be under pressure to score a few more runs in this game. There has been a bit of gloom over the Gabba which has made the ball swing a little bit.

Twitterati troll Shikhar Dhawan as he continues his woeful form 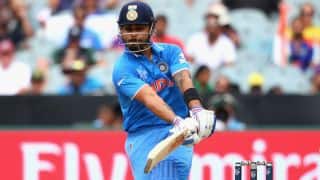