As India‘s top order continues to struggle overseas, Rohit Sharma has put his hand up for a role that has become the weakest when it comes to Tests outside of Asia: that of the opener. Virat Kohli s team is down 0-2 in the five-Test series against England, and both opening combinations used at Edgbaston and at Lord s have failed to make an impact.

Murali Vijay has scored 20, 6, 0 and 0; Shikhar Dhawan made 26 and 13 in the first Test and was dropped for the second; KL Rahul, after scoring 4 and 13 from the one-down spot in Birmingham, was promoted to open at Lord s and managed 8 and 10. These failures, allied with struggles at No 3, have seen Kohli exposed to England s well-oiled pace attack as early as the seventh, eighth and 15th overs.

It is against this backdrop that Rohit, not part of India s Test squad in England, has said that he would not hesitate in opening the innings if asked to.

“Look, I have never been offered, yet but I am open to anything as in whatever the team management wants. I never thought I will be an opener in ODIs when I started playing or when I was playing for India. But it happened along the way, so I (want to) keep my options open. No option is shut for me, so if the opportunity comes, I will take it,” Rohit told reporters at a promotional event in Mumbai on Thursday.

Rohit, 31, has not played a Test match since January when he was dropped for the dead rubber in Johannesburg after scoring 11, 10, 10 and 47 in India s defeats in Cape Town and Centurion. Each of his 25 Tests, from his debut in November 2013 to January, have seen him bat in the middle order for an average of 39.97.

India s next Test assignment is not until the tour of Australia in December, and Rohit was hopeful of a recall. “I want to be part of the team, but it is not in my hands. I have to wait for the opportunity, whenever it comes, I have to be ready for it. To be ready, I am doing everything, training, doing as much as possible to give myself the best chance when the opportunity comes there,” he said.

Asked if India could mount a comeback from 0-2 in England, Rohit said the key would be to remember what it took to win Test matches in overseas conditions.

(With input from PTI) 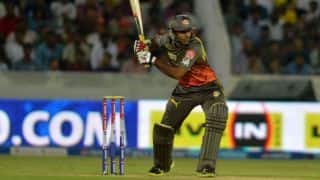