A second-half blitzkrieg from captain Rohit Sharma took Mumbai Indians to 174 for three at the Wankhede Stadium in their Indian Premier League (IPL) encounter against the Kings XI Punjab. 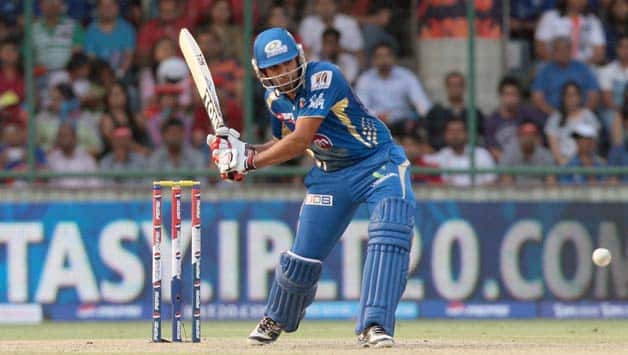 A second-half blitzkrieg from captain Rohit Sharma took Mumbai Indians to 174 for three at the Wankhede Stadium in their Indian Premier League (IPL) encounter against the Kings XI Punjab.

Rohit celebrates his 26th birthday tomorrow and gave himself an early present as he took apart the Punjab attack in the final 10 overs of the innings, after winning the toss and electing to bat.

Mumbai were 59 for two at the end of the 10th over, with Rohit just on nine. He went on to spray five boundaries and six maximums all over the park in the remaining 10 overs as Mumbai put on 115 more for the loss of just Dwayne Smith.

The big news before the start of play was that Adam Gilchrist had finally dropped himself from the side. David Hussey was captaining the visitors instead, with Shaun Marsh taking Gilchrist’s place.

Mumbai Indians opened with Smith and Sachin Tendulkar, as expected. The Little Master looked to have picked some form in his last few innings and his home crowd expected the fireworks as always.

“Class is permanent” read the electronic scoreboard as Tendulkar cracked a back-foot drive through the covers. Unfortunately for the Wankhede faithful, Tendulkar’s class wasn’t on display for long as he dragged an inside-edge off Praveen Kumar’s incoming delivery onto his stumps.

In the fifth over, Dinesh Karthik calmly flicked Praveen off his pads over deep backward square-leg and almost into the emergency fire engine for the first six of the innings. He has enjoyed his batting this tournament and was perhaps a bit too eager to get back on strike the next over as he scampered across for a quick single from the non-striker’s end, only to be sent back by Smith. Fortunately for the diminutive keeper-batsman, David Miller missed the stumps from point.

However, Mumbai’s highest scorer this season wasn’t to add many more runs to his tally as Manpreet Gony charged in to bowl the eighth over and got enough bounce on his delivery to surprise Karthik, who nicked it back onto his stumps. At 44 for two in eight overs, with the usually aggressive Smith yet to score a boundary, MI were in a spot of bother.

Smith finally got the ball to cross the rope as he drilled Piyush Chawla straight down the ground for four after the first Strategic Timeout. Almost as a reward, Manan Vohra dropped the West Indian at deep mid-wicket the same over. Smith took the cue and switched to his usual gear, as he pulled Gony hard and found the boundary again, before smacking him to extra-cover for another one.

In Chawla’s next over, Smith bludgeoned the leg-spinner for his first maximum — a massive hit into the second tier behind long-on. However, Chawla was to have his man soon, as another attempted slog to the same area went awry and was caught by David Miller. Smith was gone for 33 off 32, but that only brought another big-hitting West Indian, Kieron Pollard, to the crease, who opened his account with a booming straight drive for six.

Two quiet overs followed, yielding just eight runs, as Mumbai reached 102 for three in 15. Rohit got things started in the first of the death overs. First, he uppishly drove Gony one-bounce to the extra-cover fence, before unleashing an enormous pull that sent the ball 30 rows back behind deep mid-wicket.

The next over, bowled by Azhar Mahmood, saw a couple of lucky boundaries for Mumbai as Rohit got a French cut past the keeper to the fine-leg fence, before finding the top edge of an attempted hook that carried over the rope for six. The barrier was breached as Rohit crossed a hundred IPL sixes.

Gony came in to bowl his last over and Rohit brought up his fourth half-century of the season with a sweet and pure straight drive for another half-a-dozen. Gony then got a third Mumbai batsman to inside-edge the ball onto the stumps, but to Punjab’s utter disbelief, it was called a no-ball. What was worse, Pollard had a free hit.

Gony tried to bounce the gangly West Indian, only for the umpire to call it a wide. The following delivery was a wide full toss, but Pollard couldn’t get much bat on it. Gony finished with disappointing figures of one for 43 as Mumbai entered the final two overs at 139 for three.

Praveen was picked to bowl the penultimate over; the swinger had bowled well in his first three overs, taking one for 16, but that made no difference to Pollard who smashed him over his head for four. Praveen recovered well to concede just four more runs to end with one for 24.

David Hussey decided to bowl the last over and it would turn out to be a decision he would rue as his opposite number hit three colossal sixes and a two boundaries to make it 27 from the last six balls.