Mumbai Indians (MI) skipper Rohit Sharma, post the team’s thumping victory over MS Dhoni-led Rising Pune Supergiants (RPS) in the Match 29 of Indian Premier League (IPL) season nine, said that working with Shane Bond helped pacer Jasprit Bumrah a lot. Bumrah, ever since his debut in the national side during India tour of Australia 2015-16, has been exceptional with the ball and carried the form to IPL 2016 as well, proving to be a pivotal player for the defending champions in the tournament. The bowler claimed 3 crucial wickets with an economy of 7.25 during the match, helping MI clinch a much needed victory at Pune in the process. FULL CRICKET SCORECARD: Rising Pune Supergiants vs Mumbai Indians, IPL 2016, Match 29 at Pune

Rohit, as reported by Cricbuzz, said,  “He’s been exceptional over the last three or four months, since he came to Australia. He’s never looked back, he’s always willing to learn, he’s always wanting to improve as a bowler.”

“Working with Shane Bond is really helping him I guess. Whatever we discussed in our meetings, the execution has been happening. It’s the most important thing. I think Bumrah is executing his plans really well, he understands his bowling really well and for him to be in the wickets column is always good for us. He is a kind of bowler who can make an impact on the given day. So I think he’s just doing that for us and I hope that he doesn’t look back, keeps moving forward as a bowler and improve every time he goes on to the field,” he added.

The skipper also praised the bowlers for their contribution towards the victory. “Lot of credit to the bowlers, the bowlers have shown again and again that we’ve got quality in our bowling and they’ve come again and again and proved themselves. (It’s) is a good sign and always makes the life of a captain easier on the field when you have bowlers like those in your armoury. With the batting, I think, (it was) the perfect start although we lost a wicket in the fourth over. [Ambati] Rayudu and myself, both of us created a fifty-run partnership that was crucial and then [Jos] Buttler came and did what he is known for,” said Rohit, summing up the performance of his team.” 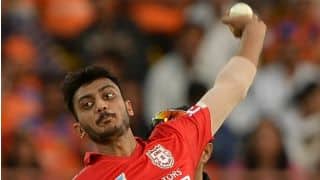