Rohit Sharma scored one of the finest half-centuries of his Test career to help India take their lead past 200.

Rohit Sharma scored one of the finest half-centuries of his Test career to help India take their lead past 200 against Sri Lanka on Day Four of the third Test at Sinhalese Sports Club (SSC), Colombo, on Monday. Rohit took on the bowlers and ensured that India kept the runs coming at a decent rate even with the early wickets. He had productive stands first with Virat Kohli and later with Stuart Binny. Rohit’s innings offered a firm reminder of just why the selectors show such implicit faith in him. He not only scored his runs fluently, but the drives and cuts were aesthetically pleasing as always. LIVE CRICKET SCORECARD: India vs Sri Lanka, 3rd Test, Colombo, Day 4

Earlier, Virat Kohli’s weakness outside the off stump was visible again when he played at one that could easily have been left alone. Kohli edged Nuwan Pradeep to Upul Tharanga at slip for 21 off 63 balls with two boundaries. Ishant Sharma’s seventh Test five-wicket haul helped India bowl out Sri Lanka for 201. However, the Sri Lankan bowlers, led by Pradeep, reduced India to 7 for 3 with Cheteshwar Pujara — who had carried his bat to score 145 not out in the first innings — getting bowled off the second ball of the innings. KL Rahul and Ajinkya Rahane were the other men to be dismissed, as India lost their top three for less than 10 for the first time since their infamous 8 for 4 against England at Old Trafford in 2014. Rohit and Kohli had then come together to take India to a relatively less precarious 21 for 3 at stumps on Day Three. LIVE CRICKET UPDATES: India vs Sri Lanka, 3rd Test, Colombo, Day 4 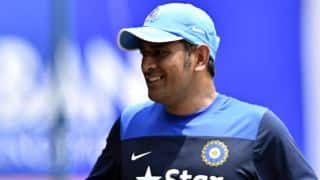