By Chetan Narula, Colombo: Indian cricket team’s batting coach Sanjay Bangar defended Rohit Sharma‘s cheap dismissals in the two innings of the warm-up game, stating that the talented Mumbaikar’s flair at No. 3 is necessary as they aim to score 300 plus runs on each batting day. While skipper Virat Kohli made it clear that Rohit will bat No 3 in the series, scores of 7 and 8 (while opening in 2nd innings) have raised a few eyebrows as to whether the experiment would work or not. “I think what he definitely brings at No 3 is the flair factor. With the kind of cricket that this team is looking to play, wherein we are wanting to at least go past 300 on each batting day, that’s where somebody of his [Rohit] calibre can chip in and contribute in that manner,” Bangar said at the post match press conference, here today. READ: Stats analysis of Indian batsmen in Sri Lanka

Bangar said that Rohit is batting well in the nets and it is just a matter of time before he gets going out there in the middle. “Rohit is an experienced campaigner. He has been on the international scene for a long period and he is hitting a lot of balls in the nets. So whatever absence of time that he has not been able to spend out in the middle [a month-long break], we are spending time in the nets and he is hitting a lot of balls. He is batting really well. It’s just a matter of time that he gets a decent start and looks to convert that into a big one,” said Bangar. READ: Ashish Nehra to decide on his future soon

Overall, Bangar was happy with how the tour game panned as both batsmen and bowlers got decent outings. “I think all the batsmen got two decent innings and this is what you basically want after a long lay-off,” said Bangar. For Bangar, in today’s age, even a month long break is a big enough gap. “I don’t term 30 days as a long lay-off but in modern-day times, that’s a big enough gap for the players to be away from the game. So it’s good to be back playing three-day format and it is an ideal preparation going into the first Test match.”READ: Ishant Sharma playing 60 plus Tests is reward of his hard work, feels Ashish Nehra

About skipper Kohli and glovesman Wriddhiman Saha‘s indifferent form, Bangar sought to play down the issue stating,”In life, we believe that we learn every day and obviously these innings must have taught each of the individual batsmen some lessons. “They would have assessed the kind of wickets we are going to encounter, the pace of the wickets and the shots you are going to go and apply in the Test matches. I think those are definitive learnings for the batsmen derived from these two innings,” added Bangar. Bangar is confident that the lower-order will come good in the series. “I think there is a lot of value in the lower-order. If you look at our lower-order, Ravi Ashwin and Harbhajan Singh have both got two Test hundreds. We all know what Bhuvneshwar Kumar is capable of because of the kind of innings and contributions that he made in England, which is considered to be the most testing of conditions. READ: Mohammed Shami eyes South Africa series for comeback

“There is a lot of value to be unearthed and definitely it was a clear indication that we are looking for contributions from the lower order as well and we do have a lot of faith in them and we are hoping they will deliver in crunch situations for the team,” he added, about the five bowler strategy. Bangar also seemed hopeful that India’s first choice opener Murali Vijay will overcome his hamstring injury and be fit for the first Test starting next Wednesday.”Purely from a batting perspective, the way Vijay is hitting the balls, I think he really looks in very good shape. He has been playing continuous cricket ever since Bangladesh. He went to Zimbabwe and he got to play in the one-day games. Having a fit Vijay is going to be a big asset to the team because he does give a lot of solidity to the team and plays the anchor role required in this format. We are all hoping that he turns up 100 percent fit,” Bangar signed off. READ: India dominate a drawn game vs Sri Lanka Board President XI, India tour of Sri Lanka 2015 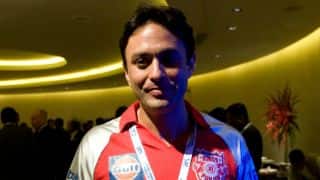