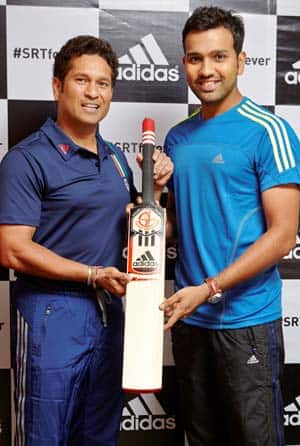 Rohit made a stunning Test debut against the West Indies and is the third Indian after Mohammad Azharuddin and Sourav Ganguly to hit back-to-back centuries in his first two Tests. Rohit is also the third cricketer after compatriot Tendulkar and Virender Sehwag to hit a double century in ODIs.

Rohit was approached by Adidas immediately after the Kolkata Test, where he hit a century on debut. In the Mumbai Test, Rohit was seen batting with an adidas bat.

Tushar Goculdas, Brand Director, Adidas India, said he was proud to have Rohit in team adidas — he is a class act on the field, an extremely talented batsman, a brilliant fielder and a natural leader.

“Besides being one of the leading run-scorers in ODIs this year, he has had a phenomenal start to his Test career and we believe this partnership will only empower him to deliver more stellar performances. Rohit is an inspiration to young, aspiring cricketers and he will be a key driving force for adidas’ cricket equipment business,” he said.

Rohit said it was an honour to be welcomed into team Adidas by his hero, Sachin Tendulkar.

“I have been a big fan of Adidas and their amazing line of products, always delivering the best for the athlete. This partnership has already got off to a dream start and I am raring to take on my next challenge in the three stripes,” he said.