It was the 10th over of the Indian innings when a well-set Sharma decided to step on the accelerator and finish the game quickly. 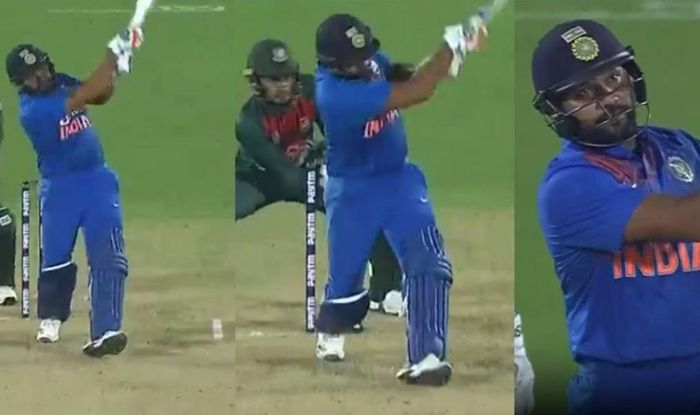 India skipper Rohit Sharma smashed his way to his 18th T20I fifty in the second T20I against Bangladesh at Rajkot on Thursday. Sharma’s 43-ball 85 not only took India over the line helping them beat Bangladesh but also helped them level the three-match T20I series. Playing his 100th T20I, the Indian captain’s innings was laced with six fours and the same number of sixes.

It was the 10th over of the Indian innings when a well-set Sharma decided to step on the accelerator and finish the game quickly. Mosaddek Hossain was at the receiving end as the 32-year-old hit a hat-trick of sixes. Out of the three sixes, two were at the mid-wicket region and one of them was over the fine-leg.

Here is the hat-trick of sixes:

6,6,6 – Rohit Sharma goes Berserk!@ImRo45 turning up the heat with a hat-trick of sixes. Treat to the eyes when he gets going!

Chasing a relatively easy target on a batting beauty, Rohit showed the gulf in class between him and the others on the park. He played risk-free cricket and bludgeoned the Bangladesh bowlers to all parts of the ground. Rohit shared a 118-run opening stand with his partner Shikhar Dhawan (31), who looked a little out of sorts. (SCORECARD)

The experienced duo put India in complete control of the chase and simply batted Bangladesh out of the contest. Looked all set to touch the magical three-figure mark, Rohit fell while attempting a heave on Aminul Islam’s shorter one. His replacement Shreyas Iyer and KL Rahul completed the winning formalities with 4.3 overs to spare.