Rohit Sharma scored an unbeaten 85 to lead Mumbai Indians to an easy 8-wicket win over Rising Pune Supergiants in IPL 2016 Match 29 at Pune.

Rohit Sharma scored another half-century to lead Mumbai Indians (MI) to a comfortable 8-wicket win over Rising Pune Supergiants (RPS) in Match 29 of Indian Premier League (IPL) 2016 at Pune on Sunday. The match ended on a predictable note, with the MI batsmen making short work of an RPS total that was never likely to cause any trouble. Rohit played the guiding hand, but he was backed up ably by Parthiv Patel, Ambati Rayudu, and Jos Buttler. FULL CRICKET SCORECARD: Rising Pune Supergiants vs Mumbai Indians, IPL 2016, Match 29 at Pune

Parthiv dominated the opening partnership with Rohit by scoring 21 of the 39 runs the duo scored together. Parthiv’s 21 came off 15 balls and had as many as 4 boundaries. He was done in by a terrific catch by wicketkeeper MS Dhoni, diving to his right to take the edge produced by Ashok Dinda. Rayudu, who had had a fiery run-in with Harbhajan Singh earlier in the day, ended up scoring 22 off 19 with 1 four and 1 six before holing out to Ajinkya Rahane off Ravichandran Ashwin. FULL CRICKET UPDATES: Rising Pune Supergiants vs Mumbai Indians, IPL 2016, Match 29 at Pune

At 91 for 2, MI were absolutely cruising. RPS desperately needed a couple of quick wickets, but Rohit found another able partner in Buttler. The English wicketkeeper-batsman scored a fluent unbeaten 27 from 17 balls with 2 fours and 1 six. Rohit got to another comfortable half-century at the other end, and once again saw his team through till the end. After playing the role of anchor for the first 15 overs he opened up toward the end and finished the match off with a six in the 19th over. Rohit ended up unbeaten on 85 off 60 balls with 8 fours and 3 sixes.

Earlier, Saurabh Tiwary and Steven Smith played fine innings to lead Rising Pune Supergiants (RPS) to a reasonable 159 for 5 against Mumbai Indians (MI) in Match 29 of Indian Premier League (IPL) 2016 at Pune on Sunday. It is fitting that what will be the final IPL 9 match in Maharashtra is being played between the two teams representing the state. MI won the toss and put a severely injury-ridden RPS in to bat. With Faf du Plessis and Kevin Pietersen already ruled out of the tournament, Mitchell Marsh too joined their ranks earlier in the day.

As a result, Scott Boland was given an IPL debut and Peter Handscomb was retained following an indifferent debut. RPS suffered an early set-back as Ajinkya Rahane spliced one from Mitchell McClenaghan to Krunal Pandya at third man. However, Smith came out all guns blazing, and with Tiwary giving excellent support, RPS dominated MI.

Sadly for the Pune spectators, their home team’s domination did not last as long as they would have liked. Smith was done in by a fine bouncing, in-coming delivery from Jasprit Bumrah for 45. He ended up nicking behind to Parthiv Patel after having faced 23 balls and hitting 4 fours and 3 sixes. The partnership for the second wicket produced 84 vital runs a little more than 7 overs. Handscomb was dismissed soon after, top-edging a sweep shot off Harbhajan Singh to Jos Buttler in the deep.

Meanwhile, there was a slight break in cricketing action in favour of some action that did not bode well for MI’s ‘Fair Play’ ratings. Harbhajan Singh and Ambati Rayudu were involved in a slight spat, though luckily it did not get out of control. Tiwary hit a ball firmly to cow corner, where Rayudu dove in an attempt to stop the ball. It was an unsuccessful attempt and the ball went to the boundary. Harbhajan made angry exclamations and gestured that Rayudu should have put in a better effort. In response, Rayudu shouted back at Harbhajan and the two men advanced toward each other. Better sense prevailed and Harbhajan ended up giving Rayudu a hug instead, but Rayudu was still visibly upset and pulled away. VIDEO: Harbhajan Singh, Ambati Rayudu involved in on-field spat during IPL 2016

Tiwary soon got to a well-deserved half-century, off 39 balls. He had played some excellent shots early on, but the wickets of Smith and Handscomb had made him slow down a bit. Tiwary was out soon after, holing out to Hardik Pandya off Bumrah for 57 off 45 balls. He had hit 4 fours and 2 sixes. MS Dhoni failed to get going, and was ultimately dismissed for a run-a-ball 24, caught by Rayudu off Bumrah. Thisara Perera and Rajat Bhatia did not do much at the end as RPS ended at a moderate 159 for 5.

VIDEO: When Mumbai Indians teammates Harbhajan Singh and Ambati Rayudu almost got into an on-field fight 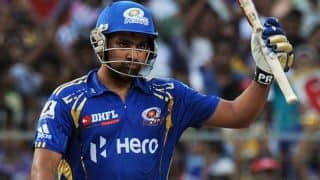