For almost a month-and-half, Rohit Sharma kept Twitter busy with his form that eluded him since his departure from India. 11, 10, 10, 47, 20, 15, 0, 5 were Rohit s scores in the ongoing tour before Tuesday. To turn things around, he slammed his maiden ODI fifty-plus score in South Africa, at Port Elizabeth. Rohit s 17th ODI hundred set up India s series-clinching win.

The Indian vice-captain dismissed the notions of poor form after the match.

We always, in our dressing room, we are always talking how we are batting and how we are playing the ball. Scores sometimes don’t reflect that at times, sometimes they do, but that doesn’t mean that suddenly you have become a bad player.

Because you have achieved so much, scored so many runs, 2-3 bad innings doesn’t change that. This is not just for me, but for all batsmen in the team, because such a situation does come that you are trying your hardest but things don t come off. So at that point it is important that you relax and take a step back and think about what you need to do in the next game. Because every day is a new day and what you have done in the past. It is the same thing I am thinking right now. My hundred has gone now and the next game I play, the hundred I scored isn t going to matter much, Rohit was quoted by Cricbuzz after India s win.

Not in a mood

Rohit s hundred ensured India s first bilateral series win in South Africa. However, the batsman did not celebrate as expected after reaching the milestone. He was directly involved in two run outs, that of Virat Kohli and Ajinkya Rahane, which derailed India s momentum. However, he knew anything near 280 on the slow surface would be difficult for South Africa.

Celebration… yaar (friend) two guys got run out before me earlier so there was nothing to celebrate about. I was not in mood to celebrate. But I knew that if we could get 270-280, it will be difficult for them because we knew the wicket is very slow and anything could happen as our wrist spinners are bowling very well and they have troubled their batsmen a lot. So we knew that 270-280 was a good chance to win, he added.

As special as CB series win

Rohit termed the win in South Africa as special as winning the CB Series in Australia, ten years back. Rohit, then 20, played a vital role in India s wins.

This will be right up there. After 25 years we have won a series in South Africa. Not the easiest place to play cricket, definitely not the easiest place to win a series. I think a lot of credit [goes] to the boys. Everybody who got an opportunity put his hand up and took up the challenge. If you look at the entire ODI series, it was a dominant performance for us.

This will only give us confidence as a team to go outside and keep winning those series. The Test series was very close, I believe. It could have gone either way. Anyway, we are very proud of our performance and very proud of what we achieved today, Rohit added.

India and South Africa will play the sixth and final ODI of the series at SuperSport Park, Centurion on Saturday. 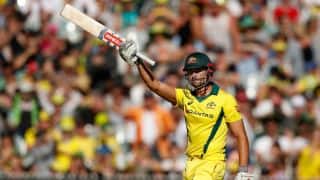 Marcus Stoinis ahead of Auckland T20I: My career pretty much started here