Rohit Sharma and Virat Kohli stitched 230 runs for the second wicket, eventually propelling India to 337 for 6 in the third and final ODI. Playing at Green Park in Kanpur, Rohit and Kohli scored hundreds and crushed the New Zealand bowlers to pulp. Mitchell Santner was pick of the bowlers, taking 2 for 58.

The dew factor compelled Kane Williamson to bowl first. Given they have one spinner and India have two, New Zealand have the upper hand by all means. Virat Kohli did not mind. He believed his men can amass runs by plenty on this track. Opener Rohit Sharma and Shikhar Dhawan proved their captain right. The duo faced no difficulty scoring fours against New Zealand s seamers. More importantly, they displayed temperament when the ball was pitched outside their comfort zone.

Dhawan flicked, played on the up, scythed. In short he continued his stellar performance. However, he fell could not fight his demons and mistimed a lofted yet uncharacteristic shot. The extra bounce made the bat wobble in his hand, and the ball could not travel past Williamson at mid-off.

Both Rohit and Kohli continued picking boundaries. There were plenty, but Rohit s pull over deep mid-wicket was special: imagine Rohit taking leg-stump stance; the ball pitches just short of length; Rohit brings the bat down from an arc; you can paint the picture.

India paced up as the ball lost its shine. The first fifty came in 58 balls and the second in 54. Rohit, too, reached the mark, his 35th in the format. In the process he completed 1,000 runs in ODI first, of course, was Kohli.

That was not it. It was an encore of Rohit and Kohli s genius. Perhaps at one point you pondered if you had seen this before. No matter how well etched it is in your mind, the replay of their strokes did not make you yawn. I, for that matter, was in awe, thinking how they can time and again accumulate runs at such spectacular consistency. Enough digressing!

Kohli, too, reached fifty, but all eyes were on Rohit. He scored his 15th hundred with a flick. Adding more extravagance to Rohit s achievements, he has now 150 sixes in ODIs. He took the second-least number of innings (165); Shahid Afridi (160) tops the list, while MS Dhoni had taken 192 innings.

Rohit continued, and you know what happens then. Will he score 200? Or, will he go past 250? The Hitman of Indian cricket has the knack of surprising. However, he failed to get enough elevation while trying to reach 150 with a six down town. Southee, at mid-off, took a good catch. Rohit ended the memorable knock at 147 off 138.

With Rohit gone, Kohli was back in the limelight. First, he scored those 83 runs and became the quickest to 9,000 runs. He achieved the feat in 193 innings, dethroning AB de Villiers who had taken 205 innings. A few overs later he scored his 32nd ODI hundred. In the pursuit of all this, Kohli became the quickest captain to 5,000 runs.

Like Rohit, Kohli too perished while trying to shoot up the run rate. That did not hurt India, for they still had hungry power-hitters waiting to unleash the beasts within them. Although Hardik Pandya went early, Kedar Jadhav and Dhoni used the long handle to destructive effect in the death overs. Dhoni blasted 25 off 17, while Jadhav added 18 off 10. 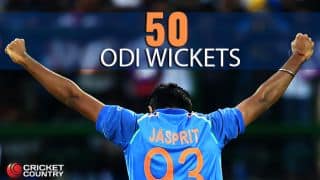