As the big three of Indian Test batting -- Sachin Tendulkar, Rahul Dravid and V V S Laxman -- enter the twilight of their careers, the spotlight is firmly on the men who seek to replace them in the years to come. 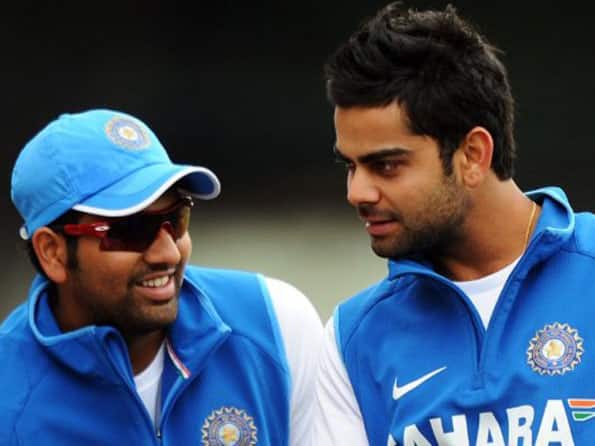 Rohit Sharma (L) and Virat Kohli have emerged as front-runners to occupy two of the three slots of the Big 3 of Indian cricket – Sachin Tendulkar, Rahul Dravid and VVS Laxman AFP

As the big three of Indian Test batting — Sachin Tendulkar, Rahul Dravid and V V S Laxman — enter the twilight of their careers, the spotlight is firmly on the men who seek to replace them in the years to come.

Young guns Rohit Sharma and Virat Kohli have emerged as front-runners to occupy two of the three slots. The trio of Tendulkar, Dravid and Laxman are, perhaps, on their last tour to Australia when they depart ahead of the rest of the touring party on December 8 and replacements need to be identified sooner than later.

Sharma, 24, and Kohli, 23, have been in top form in the 50-over format that has, of late, been the stepping stone for entering Test cricket and, significantly, both have found berths in India’s team for the much-awaited four-match rubber commencing December 26.

Though Delhi-born Kohli has taken a march over Sharma as far as earning a Test spot in the eleven is concerned, it must not be forgotten that it was the latter who was first on the starter’s block only to false start through a freak ankle injury just half an hour before commencement of play against Australia a few years ago at Nagpur.

Both have been among the runs in the ODI format. Sharma has continued from where he left off in the Caribbean in the return series against the West Indies at home while Kohli, after having made little impression in the three-Test series on the same tour, has done much better when given a chance to Test his mettle in the slot vacated by Yuvraj Singh.

While Sharma has been the fulcrum around which the Indian batting has revolved in the ongoing ODI series against the West Indies, with scores of 72, 90 not out and 95 in the first three games, Kohli came into his own with a classy 117 and his partnership with Sharma took the team past the challenging score in the second game.

Kohli’s ton was his eighth in 72 ODIs and third in the last nine games and his tally of over 900 runs in ODIs this year is second only to leading run-getter – England’s Jonathan Trott.

Though he did not prosper in the third game yesterday at Ahmedabad, which India lost by 16 runs after a top order collapse, Kohli showed good touch.

Sharma is on a roll in the home series. It required a superb direct hit from West Indian captain Darren Sammy from mid on to send him back when he seemed determined to take India home again after half the side had been lost for 84 chasing a tough target of 261.

According to former India skipper and ex-chief selector Dilip Vengsarkar both these batsmen are fully ready for Test cricket as they possess excellent temperament and ability to play the short ball.

“Both have outstanding talent and are ready for Test cricket,” added the former middle order batsman.

Virender Sehwag, who is leading the Indian squad in the five-match rubber, was also effusive in his praise of the talented duo of young batsmen in the series.

The duo’s tough test obviously lies on the bouncy pitches in Australia where they would be severely tested by the home team’s young pace bowlers who would be eager to make a mark.

If they come out with flying colours Down Under, the most severe of their critics would have been answered. (PTI)